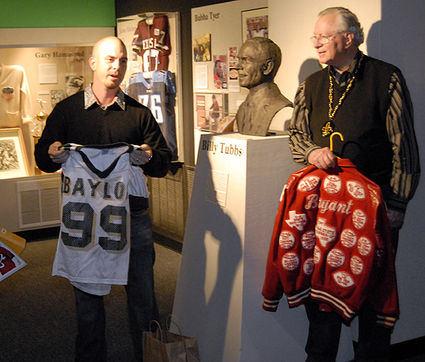 Once a Bridge City Cardinal place kicker, Matt Bryant, became a Southeast Texas legend Saturday. A kicker for the Tampa Bay Buccaneers, Bryant was inducted into the Museum of the Gulf Coast, in the museum Sports Hall of Fame.

To make the event sweeter Bryant served as grand marshall for the 2009 Port Arthur Mardi Gras Parade the same day. In a ceremony attended by 150 former coaches, teammates, family and friends, Bryant accepted a certificate from Dr. Sam Monroe, president of the museum.

"Everybody here, through some form or fashion, by your friendship or by family, has had something to do with my success," Bryant said, "I just do the best I can through what you have given to me." "It's our priviledge, me and my family," Bryant said, "Because of your positive influence, to share with us this honor and experience," he said.

Bryant is the son of Casey and Mary Bryant of Bridge City.

In 2006, a place kicker for the Tampa Bay Buccaneers, Bryant booted a franchise-record 62-yard field goal as time expired to defeat the Philadelphia Eagles. It was the third longest in NFL history.

But one of his greatest achievements may have been born from tragedy during the 2008 season. After the sudden death of his 3-month-old son Tryson, Sept. 24, Bryant, 33, and his wife, Melissa, founded the Matthew Tryson Bryant Foundation. The foundation raises and allocates funds to several children’s charities and to help fund research into SIDS, Sudden Infant Death Syndrome.

"Matt Bryant is an outstanding football player and person," Monroe said, "We recognize him because of his his national acclaim, his Southeast Texas roots and the kind of person he is on and off the field."

Bryant presented the museum with his Bridge City Cardinal letter jacket covered with patches from football and baseball recognitions. He also donated his No. 99 Baylor University football jersey.

"I know I was a kicker but I was always a linebacker at heart," he joked about the No. 99. He was a linebacker and kicker at Bridge City. His retired No.99 Cardinal jersey hangs in the foyer of Bridge City High School.

Bryant also presented his Tampa Bay Buccaneer jersey, the famed No. 3, from which comes the names of his sons, Tre and Tryson. The museum is designing an exhibit with his football memorabilia.

Matt Bryant becomes the fourth Bridge City Cardinal football player to be inducted into the Museum of the Gulf Coast. Steve Worster, Shane Dronnett and Jason Mathews have also been inducted.

Bryant signed on with the New York Giants in 2002. He joined the Tampa Bay Buccaneers as a free agent on March 2, 2005.

He became a finalist for the 2007 NFL 'Walter Payton Man of the Year Award' – not for his proficiency as a kicker but for his community service work. He became a spokesman for Florida’s Child Predator Cyber Crimes Unit.

He and his wife Melissa have been active in helping other parents and families deal with illness and loss, including hosting a fund raiser for cystic fibrosis. The Bryants were named the 2008 Ambassador Family for the March of Dimes Florida Chapter and in August were named Florida’s March of Dimes Volunteers of the Month. 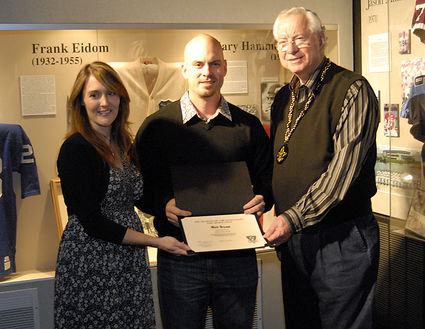 In Bridge City, Matt Bryant the baseball player, was a member of the 1992 Cardinal baseball team under then-head coach Chuck Young and assistant coach Charles Miller. The team finished the season in the final round of UIL State Baseball Championship. During the 1992 baseball season Bryant once hit four home runs in four consecutive times at bat.

It was the only time the Cardinals would make the trip to Austin until Bryant’s brother, Billy Bryant, brought the Cardinals to back-to-back state tournaments in 2005 and 2006. His five year coaching record (2003-2008) for the Cardinals was 151-32.

Matt Bryant also has an older brother Kim and sister Sherry. The Museum of the Gulf Coast is administered by the Port Arthur Historical Society