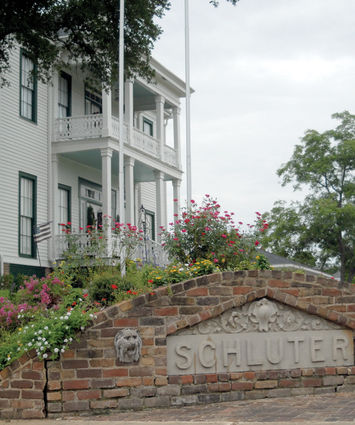 Census takers in 2010 may not have an easy time documenting all the residents in a little town called Jefferson. The difficulty comes in the “fact” that a good portion of Jefferson’s residents are no longer of this world. Some people have started calling Jefferson “the most haunted small town in Texas,” according to Jodi Breck, guide of the Historic Jefferson Ghost Walk.

Jefferson is a small, quaint taste of Americana that is located about 200 miles north of the Golden Triangle. It’s a wonderful step-back into yesteryear that is worth the trip whether you believe in ghosts or not. Downtown, almost every building is a historical treasure documented with Texas Historical Commission plaques. Some stores still have “hitching posts” where you can tie up your horse.

The Texas Society of Paranormal Investigators (TSPI) recently journeyed to Jefferson to stay in the legendary Jefferson Hotel which is said to have many ghosts still residing there. They were joined by the infamous host of Ghost Tours of Galveston, Dash Beardsley and his lady, Tamera Barker.

According to Breck, there is some hype on the Jefferson and on a scale of 1 to 10, she would give it a 7. Not all tales can be verified, but the one of the “woman in white,” the jilted bride that hung herself is true. For many years Breck thought it was just another tale, but after several years, she actually found documentation that there was indeed, a woman staying at the hotel with her family that was to be married, but her fiancé never showed. She did hang herself in the hotel.

Across the street from the Jefferson is the oldest hotel in east Texas and the second oldest in the state. Built in the 1850’s, the Excelsior House has been host to many famous people, including Ulysses S. Grant, Oscar Wilde, Rutherford B. Hayes and Lady Bird Johnson. The Excelsior House, In Breck’s opinion, scores 10 out of 10 for spiritual residents, but management doesn’t acknowledge the fact that the hotel is haunted.

The story most people want to hear is about Steven Spielberg, who stayed in the hotel in the early 70’s before he made it big. On a Monday night, after scouting locations, the crew stayed at the hotel. Spielberg really didn’t want to spend the night, he thought it was an old, musty hotel and wanted to go into Marshall and stay somewhere new. Everyone else was tired and cranky so he gave in.

“They gave him number 215, known as the Jay Gould room...It’s supposed to be the most active room...sometimes you can feel somebody come sit on the bed and touch you,” said Breck.

She said they keep a journal in the room for people to document their stay. “It’s interesting to go back and read what other people have experienced in the room.”

“The story with Spielberg is, he threw his briefcase in the rocking chair and it threw it back at him.” He said he felt uneasy all night; felt someone was behind him and following him everywhere he went. He had a hard time sleeping, “but he finally managed to go to sleep. Sometime after midnight he woke up. There was a little boy asking him if he was ready for breakfast. He said, ‘We’re outta here!’ He got everybody up in the middle of the night, they left and they got a room in Marshall.”

Breck said for years and years she didn’t know if it was true or just one of those “stories,” because she couldn’t find his name in the register.

“Now there are two ways we know in fact, this story is true. There was a story written in the Dallas Morning News not long after the incident occurred that you can still look up online and read. There was an interview many years ago on an entertainment show; and they were asking about some of the movies he made with poltergeist being one of them. They asked him if he had ever been in a haunted house. He said he hadn’t been in a haunted house, ‘but I’ve been in two haunted hotels.’ He talked about the Stanley Hotel in Colorado and the Excelsior here in Jefferson and told them pretty much the same story that I just told ya’ll.”

There are two ghost tours in town. The other tour is free, and ends with a ride on the “ghost” train at the end for $10. Save your money. Half of TSPI went on Breck’s tour, half went on the other.

The consensus is that Breck’s is worth every penny with the knowledge and detail she bestows, she has guided the tour for 10 years. The other was considered a waste of time and just a way to promote the train.

Breck also offered a tour of the Pride House, Saturday. The home is documented as the first bed and breakfast in Texas, known as the Brown-Bender home; built in the 1880’s by Daisy Brown and her husband, George. They had six children. Daughter, Jenny died at the age of 15 succumbing to extensive burns she received after catching her nightgown on fire Christmas Day.

The current owner, whose name is also Jenny, has only owned the house a couple of months and lives in Dallas, she refuses to stay in the house alone. When she comes to town, she stays in the cottage out back. Sometime whistling can be heard and someone calls “you who.” She always answers thinking someone has come in the house, but she always finds herself alone.

Beardsley said he felt the presence of a man that was over six feet tall in a gray suit, possibly a uniform with something like fringe under the sleeve. Breck verified she has been told the exact same thing by two other psychics in the past.

There are EVPs that have been recorded in the home and a recent photograph has been taken of a “spirit” coming down the stairs.

There were many other tales, including the Schluter house, where the mother left a doll in the window after losing a child and photos frequently reveal a woman in the window. 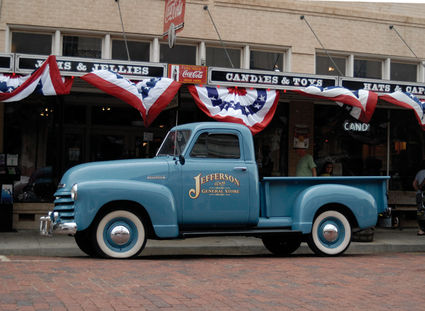 If you’re not into ghost, Jefferson still has plenty to offer has a historical town. It was the northern most port in Texas as it was the last place in the river that was wide enough for steam boats to turn around. It became a major pipeline for transporting cotton and other cargo and lasted until man made flood control reduced the water levels making it impossible for steamboats to navigate that far upriver.

These days, the major industry is tourism. Check out the General Store for memories of yesteryear available for purchase. The city has many antique stores, vintage churches, old homes and lots of stories. It is worth the drive and would be a great weekend getaway no matter what your interests are.