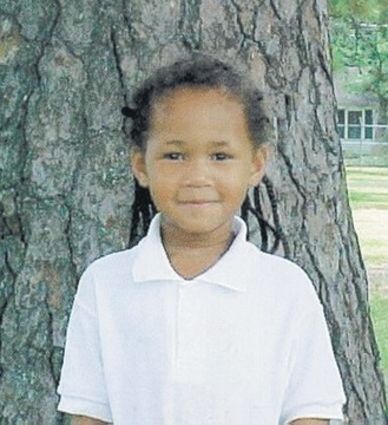 Her life was brief. Her brutal murder remains unsolved, and she would have been 12 on July 22.

But Dannarriah Finley isn’t forgotten. Even though it’s now been eight years since her death – another year passes this week without an identified suspect or arrest – every piece of tangible evidence remains on display for investigators at the Orange Police Department. They cannot and will not forget, either the case, or the memory of little Dannarriah, who rests in a small, slightly marked grave, a short drive from the home she once lived with her mother and siblings.

Pieces of the torn, flowered sheet her body was wrapped in at the time it was discovered. Hair follicle and DNA test results, conducted for months on area sex offenders and other persons of interest in the case. And an overflowing binder with pages and pages of photographic evidence, show the effort investigators put into the July 2002 kidnapping, rape and murder. In early February 2004, investigators turned that evidence over to the Orange County District Attorney’s Office, saying at the time that they believed a Grand Jury Indictment could come in four-to-six-weeks.

“We believe we know who did it,” investigators said at the time.

But a suspect was not subsequently named and the official status of the case remains unsolved.

A community-wide search was launched on July 4, 2002. Dannarriah’s mother, Jamie Arnold, called police early that afternoon, saying she had awaken at about 10 a.m. to find Dannarriah’s siblings playing at the home, but the four-year-old could not be found.

Hopeful that it was a child abduction case, large and public search parties were immediately launched by both area law enforcement officials and the community. People gathered at churches to set out on foot, while law enforcement agencies from around southeast, Texas combed the area, searching for Dannarriah, who at the time was enrolled as a PreK student at North Early Learning Center in Orange. Her description and picture were at the forefront of media coverage.

“She was wearing a white floral shirt and purple shorts. She wore her hair in braids,” the description read. “Her cheeks are chubby and a big smile, but they call her frog legs, so she should be considered small or thin.”

Search areas expanded over the next few days as the community waited and hoped that Dannarriah would be brought home alive. Police used helicopters, tracking dogs, anything they could think of to find her. Although exhausted from their efforts, police said they would “not quit” until she was found.

“You hope you can find a little girl fast,” police said.

Dannarriah’s father, Johnny Edwards, offered his 1980s model car as a reward for the safe return of his little girl, while family members spoke with “shaky voices” to police and media personnel as the search entered its fourth day.

But on that day, Dannarriah’s body was discovered in a rural area of Pleasant Island in Port Arthur, 27-30 miles from her Orange home. A local worker found the body of Dannarriah Finley at about 3 p.m. July 8, 2002 on a small, isolated dirt path. He told local media at the time that the “badly decomposed” body was wrapped in a floral sheet and looked to have been “dumped” in an way that “dredging crews would finish covering her with clay deposits” from the area.

And even though the physical condition of the little 40-pound body, hampered immediate efforts to positively identify her, the community knew it was Dannarriah and began to mourn. Reports say that Dannarriah was later identified through DNA testing. Police also said the little girl had been sexually assaulted.

While exhausting their efforts to search for Dannarriah, police investigators had also been conducting an extensive investigation into her disappearance and subsequent death from the time she was reported missing. Orange Police Chief Sam Kitrell had already called in the FBI and had been coordinating investigations efforts at the original crime scene, Dannarriah’s home.

Police removed a garbage can from in front of the residence and spent countless hours there, looking for clues as to who was responsible for the crime. And once her tiny body was discovered, investigators threw their efforts into the investigation. They collected hair follicle evidence, conducted countless interviews with neighbors, community members, area sex offenders, family, and persons of interest.

Every DNA test was carefully conducted. Each piece of evidence was thoroughly examined and sorted as investigators, now fueled by the emotions of her tragic death, focused their attention on catching the person responsible for the brutal homicide.

Dannarriah was laid to rest, while police distributed posters of the floral blanket she had been wrapped in and poured over information about local and non-local sex offenders – looking for anyone who might have been in the area at the time of the crime. Members of other area law enforcement agencies continued to assist Orange police, as did the FBI.

Weeks and months went by and even though the case began to fade from the media spotlight and other law enforcement agencies slowly went back to their own cases, Orange police investigators remained determined to identify Dannarriah’s killer.

“An innocent little girl has been murdered. Her precious little chubby cheeks will stay in my mind forever,” one investigator said at the time.

“This case is something we intend to solve and we won’t quit,” another told reporters.

After more than a year-and-a-half of exhausted efforts, in early February 2004, Orange Police Chief Sam Kitrell made the much anticipated and public announcement.

“We believe we know who did it,” he told media at the time. “I believe the police department has done an excellent job.”

The number of potential suspects isn’t publically known, but the efforts of investigators had finally led to one person. Though not named, evidence and hair follicle charts from the police department indicate a possible suspect lived or had been staying within a few miles from Dannarriah’s Fourth Street home at the time of the crime.

Police investigators said from the beginning that evidence would be crucial in the case and had gone to extensive efforts to gather and safeguard their case. They wanted justice for the little girl and wanted a killer off the streets. The efforts of their investigation were much and they believed their case was a good one that would soon result in an indictment.

The suspect would soon be named and indicted by an Orange County Grand Jury. That was their hope. Police told media at the time that they believed an indictment could come within weeks as they turned their carefully prepared case over to the Orange County District Attorney’s Office for review and possible further action.

But now, six years after the crime, the case of Dannarriah Finley officially remains “unsolved.” A case is considered unsolved until a suspect has been identified, charged, and tried for the crime. There’s hasn’t been much public discussion about the potential suspect since police investigators turned over their case four-and-a-half-years-ago. A formal suspect has not been named and no known charges have been filed in the case.

Each year, on the anniversary of her death, the Dannarriah Finley case is covered by local media, and it’s occasionally thrust into the media spotlight at other times. But as the years go by – this week marks year seven – her photo is seen less on television newscasts and in local newspapers.

Many community members remember the little girl and think about her at times. Some have said they will always hold her image in their hearts. A number of children’s advocate organizations display Dannarriah’s photo on their websites and tell her story to create public awareness on the dangers children can face. And numerous internet forums continue to post messages and articles about the little girl.

But for the Orange Police Department, the Dannarriah Finley case is just as important today, as it was when it happened. Her face continues to be the spotlight of their website and on the second floor of the Orange building, sits a room set aside to display evidence in the case.

Pieces of the sheet sit safely behind clear glass, along with other evidence and photos from the crime.

“They haven’t forgotten her at all,” some say.

And investigators continue to gather and search for evidence, information and witnesses, in the hopes that the case might one day be officially “solved.”

“Those people who know something need to be brave and come forward to give the family some closure,” investigators said during the most recent news coverage on the case.

Dannarriah Finley died three weeks before her fifth birthday. This year she would have been 12.