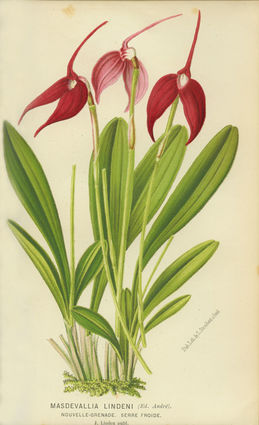 ORANGE, Texas, September 29, 2010 - The Stark Museum of Art will feature a gallery spotlight Orchids in Print on Saturday, October 9, at 1:30 p.m. and repeated at 2:15 p.m. Betty Hyatt, a Stark Museum docent, will give a presentation focusing on the life and work of artists who created illustrations for three rare botanical publications depicting exotic orchids from the museum collection. The books are showcased in a highlight exhibit of the same name which will be on view at the Stark Museum of Art from October 2 through October 16, 2010. The gallery spotlight is free to the public.

The books selected for the exhibit and the gallery spotlight exemplify the high level of botanical knowledge and the finest craftsmanship in printmaking in Europe in the nineteenth century. Discoveries of exotic plants in remote parts of the world and their successful cultivation in European nurseries led to the emergence of a large market for lavishly illustrated flower books, called florilegia, and horticultural periodicals. Visitors will see orchid plates in three volumes: Herbier de l’Amateur de Fleurs, published in Brussels in 1829; L’Illustration Horticole, produced in Ghent in 1870, and Florence H. Woolward’s The Genus Masdevallia, a florilegium published in London in 1896.

“We are excited to share our wonderful collection of rare botanical books with the public,” says Elena Ivanova, Chief Educator of the Stark Museum of Art. “These books have never been exhibited before. Botanical illustration is an important branch of art, however, botanical books are rarely displayed in museum galleries for conservation reasons and the public is not familiar with them. I hope that, when our visitors see these breath-taking pictures of orchids and hear about the work of artists, engravers and publishers, they will appreciate more this delightful and educational art form.”

The exhibit and the gallery spotlight are organized in conjunction with the Orchid Festival which will be celebrated at Shangri La Nature Botanical Gardens and Nature Center during the week of October 2 – October 9, and with the lecture Frances Ann Lutcher: The Orchid Lady sponsored by The W.H. Stark House on October 4.

Located at 712 Green Avenue in Orange, Texas, the Stark Museum of Art is open to the public Tuesday through Saturday from 10 a.m. – 5 p.m. Admission is free. Group tours are available by appointment. For more information call 409.886.ARTS (2787) or visit http://www.starkmuseum.org.

The Stark Museum of Art focuses on the stunning land, the dramatic people and the diverse wildlife of the American West. Paintings, sculpture and prints interpret the West from nineteenth century frontier artists to the twentieth century artistic colonies in New Mexico. Artists include John James Audubon, Frederic Remington, Charles Marion Russell, and Georgia O’Keeffe.

The Museum also features a significant collection of American Indian objects, including baskets, pottery, clothing and weavings. Other permanent collections in the Museum include the complete porcelain American Bird Series by Dorothy Doughty and the only complete series of The United States in Crystal, a collection of crystal urns produced by Steuben Glass to depict the 50 states and the Union.

The Stark Museum of Art is a program of the Nelda C. and H.J. Lutcher Stark Foundation, a private operating foundation, whose other programs include the Frances Ann Lutcher Theater for the Performing Arts, Shangri La Botanical Gardens and Nature Center, and The W.H. Stark House.