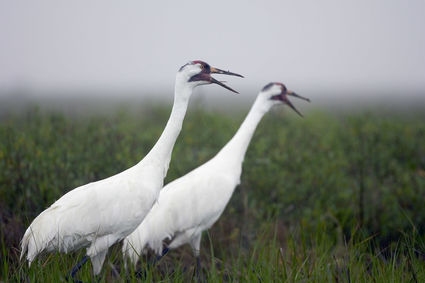 AUSTIN – Things are looking up for the endangered whooping crane. The

reported during drought conditions on the Texas coast. But according to

state and federal biologists, flock numbers have rebounded, and a new

remaining “natural” flock of whooping cranes in the wild, and, according

plays an important role in the species’ future recovery.

ranging from approximately Seadrift to Rockport, including at the

landowners within the region are collaborating in habitat management

efforts for whooping cranes, but potential threats still exist, such as

According to U.S. Fish and Wildlife Service Biologist Tom Stehn, the

Aransas-Wood Buffalo population of whooping cranes rebounded to 264 in

size should reach record levels this fall — expected to be somewhere

around 290. Once numbering only 21 birds on earth, the previous

“Under good conditions, Texas’ coastal wetlands provide a variety and

abundance of food and fresh water that normally lead to excellent

survival of whoopers over the winter,” Linam said. “Such excellent

they migrate through the state. The cranes usually pass through a

migration corridor that extends from the Texas

Dallas-Fort Worth and southward to the central coast wintering grounds.

Their flight path would take them over cities such as Wichita Falls,

Fort Worth, Waco, Austin, and Victoria. The majority of the cranes pass

south through Texas from late October through the end of November.

Whooping cranes are the tallest birds in North America, standing over

four feet tall. They are solid white in color except for black

wing-tips visible only in flight. They fly with necks and legs

outstretched. During migration they often pause overnight to use

wetlands for roosting and agricultural fields for feeding, but seldom

remain more than one night. They nearly always migrate in small groups

of less than four-to-five birds, but they may be seen roosting and

feeding with large flocks of smaller sandhill cranes. Hunters are

advised to learn to tell the difference between whooping cranes and

Whooping cranes are protected by federal and state endangered species

laws, and Texans can help safeguard this national treasure by helping

to prevent harm or harassment to whooping cranes. Anyone sighting a

Sightings can also be reported via e-mail at [email protected].