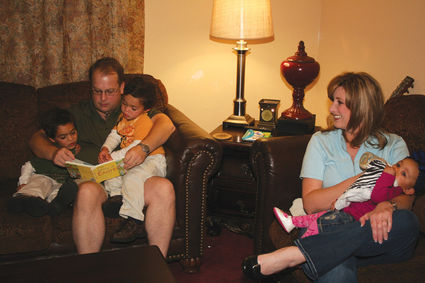 This month, mass adoptions and other events are being held across the state to put the spotlight on the plight of children waiting for permanent homes and a chance at normal lives, Shari Pulliam of the Region five information office said. Many events occur near National Adoption Day on November 20.

"Thousands of older foster children are asking themselves, 'Why not me? Why can't I have a family?'" Pulliam said, "During November, which is National Adoption Awareness Month, the Texas Department of Family and Protective Services (DFPS) is asking caring adults 'Why not you? Why not adopt an older child?'"

"If you are adopting, go CPS," the Shelly and Doug Manning, current adoptive parents with the DFPS said. "They go above and beyond with everything.They are there and work with you." The Mannings live in Orange and Doug is the Assistant District Attorney for Orange County.

"I think there is a fear that these [CPS foster] children are damaged. They're no more damaged than any other child.," Shelly said.

Originally the Mannings were working to adopt though China but the country changed their adoption polices and the non-profit adoption agency they were going through went bankrupt and had to close their doors. The couple lost thousands of dollars in the endeavor.

The two looked to CPS, took PRIDE classes. PRIDE classes, Parent Resources for Information, Development and Education, are required for anyone wanting to adopt or become a foster parent through CPS. Those who are single may take the class by themselves, but married couples MUST attend the classes together.

"The other thing is that [CPS] wants to place kids with you that will be compatible [with your family]. They are wanting it to be a life-long relationship."

The number of children adopted from state care has increased dramatically (41.4-percent) since the introduction of the "Why Not Me?" campaign in 2007. Last year, 4,772 abused or neglected children and teens were adopted from state care in Texas. Yet the need for safe and loving homes has not diminished - more than 5,800 children in Texas foster care are awaiting adoption today.

"These children and teenagers desperately need the love, attention, and stability only an adoptive family can give them," Audrey Deckinga, DFPS assistant commissioner for Child Protective Services, said. "Almost half of these children are tens years of age or older. These older children tend to linger in the system longer - but no matter their age, children never outgrow the need for parents."

"In Region 5 alone, which includes Orange County, 167 children are still waiting for their 'Forever Home,'" Pulliam said. "This number grows larger when looking across the state to 5,838 waiting to be adopted."

When Shelly and Doug saw their two boys for the first time at their McDonalds scheduled play date they knew it was meant to be.

At that time, the couple said, Mason, their now middle child at two and half, was sick. The pictures from back then showed it.

The Mannings were to get the two brothers, Mason and Robert, now three and half, the next weekend, but Hurricane Gustav hit Southeast Texas and everyone had to evacuate, including the boys who were with their foster family. Ike hit next and the couple had lost contact with them the entire time.

"I work for the county and all I got this little [cell phone] picture of my kids with me," Doug said.

It was a hard for the Mannings to talk about this time.

When the two boys were finally able to come for their weekend visit with their future parents, time flew by for the family. Shelly remembers one of the brothers attempting to disappear when the CPS worker came to get them. Even their worker didn't want to take the boy's way from their future home, but she needed to follow CPS policy.

This was a very hard day for Shelly.

Now the brothers are in their home and have a new 10-month-old biological sister who will be adopted on National Adoption Day. CPS tries to keep biological siblings together during the adoption process. The Mannings were informed of the girl's birth and were offered to bring her in to their home.

"Judge Nathan has been really good," they said of the judge who finalized the brothers and will finalize their daughter's adoption on November 19, which is National Adoption day in Jefferson County.

Maya is a beautiful and curious child who the Mannigns were given the opportunity to adopt because CPS wants to keep sibling groups together.

The goal of the "Why Not Me?" campaign is to increase the number of children who are adopted, especially older children and African-American children.

What greater gift than the gift of family. Children are waiting at AdoptChildren.org because no child should have to ask the question, "Why not me? Why can't I have a family?"

"Why Not Me" Facts

- Approximately 5,800 children in foster care legally free to be adopted.

- 4,772 children were adopted from the Texas foster care system in fiscal year 2010.