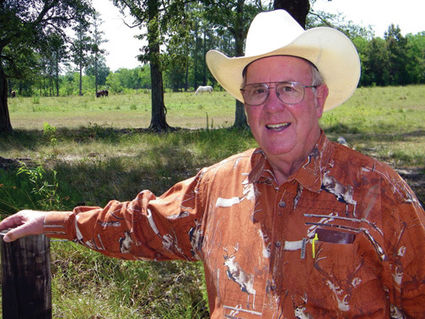 Wayne Peveto spends most of his time these days working with cattle and horses on his 3500-acre ranch north of Orange. Once, he stood on the floor of the Texas House of Representatives, getting legislation passed and going head-to-head with politicians.

He finds his cattle and horses less stubborn.

“I enjoy them much more,” he said with a chuckle.

This year marks 32 years since Peveto got his tax-appraisal bill passed, known as The Peveto Bill, which revolutionized the tax-appraisal process across the state.

Peveto’s bill created the appraisal districts that operate in every county of the state. Before, each county could perform it’s own appraisals, as well as each city, school district and any other special district, such as drainage districts.

“Some taxed automobiles and some even taxed chickens, as there was no standard tax base.”

So Peveto, through his bill, created one appraisal district in each county, bringing the number down to 254 taxing entities instead of 2,200.

“Before, if a taxpayer felt that he had been appraised unfairly, he could go to a board and file a complaint against that one appraiser,” Peveto said. “But, if that didn’t solve the problem, taking it to court was pointless. Under the bill, the taxpayer would go to one appraisal review board for the one appraisal district in their county and could take it to court if they were not satisfied with the result.

“And, if the taxpayer won, the appraisal district would have to pay the taxpayer’s cost for attorney fees.”

The bill also included that local property tax revenues could not be increased except after a notice to taxpayers and a public hearing held and that the assessment ratio had to be set before the tax year begins.

It took four times for Peveto to get his bill through both houses of the state congress, as the senate killed it three times.

Even though the third vote of his bill failed, Peveto showed the Senate that he meant business.

“Under House rules, a senator’s local bill could be killed if you spoke against it for ten minutes,” Peveto said. “So, one day I spoke against each senator’s bill that was on the floor. I got a call from the lieutenant governor and had a meeting set up with five different senators. I was assured my bill would get a vote on the senate floor, as a two-third’s vote was required, if I’d take back my opposition to their local bills.”

“I just couldn’t get that passed back then,” he said. “Too many people were making money by having different collection offices and they didn’t want to change the system. But, it ended up changing anyway.”

Peveto served six terms in the Texas House, retiring in 1985.

“I was just burned out,” he said. “I had two boys starting high school, and I wanted to be here for them as well.”

But, Peveto will always be known for getting the appraisal districts in Texas up and running, implemented across the state by 1982.

“It was probably around eight to ten years after it passed that people who opposed it began to realize the importance of it,” he said. “I’ve even been contacted by politicians from other states so they can ask my advice ... because we now have the best appraisal system in the United States.”