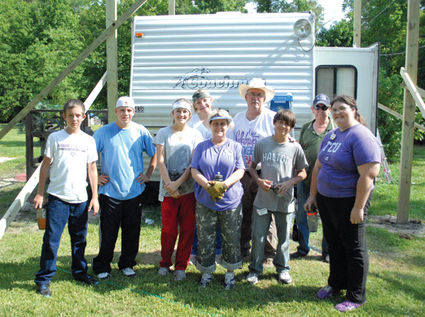 In August of 2010 James Rainwater moved into his trailer home and just a few months later was overwhelmed by a leaking roof. After calling around the Orange County for months, and getting no positive responses, Rainwater finally received help from a group of teens who are devoting their summer to help restore homes of those in need.

Initially Rainwater had tried many different ways to patch up the roof himself, such as tape, but in the end nothing seemed to give even temporary relief. Finally, after receiving no help, Rainwater had to resort to covering his couch and putting buckets on the floor to keep the rain from ruining his possessions.

“I started calling, probably around January, with the Southeast Texas Regional Planning Committee, and each time I called I thought maybe this would be the one and ended up going back to square one,” Rainwater said. “I tried patching it myself and thought maybe that would help, but when it didn’t work I just didn’t know what to do.”

Within the last couple of weeks, Rainwater talked with 10 to 15 people trying to get some help, and finally got a call to set up an interview with a group from the Central Texas Conference Youth in Mission.

The Central Texas Conference Youth in Mission from Fort Worth, headed by Rachel Heyduck, was founded in 1993 in response to floods in Missouri. When agencies that serve to help disaster areas finish their time in those areas, many homes slip through the cracks and do not get the help that is needed, leaving them in bad shape. The CTCYM comes into these towns and helps rebuild homes for those that request help.

This particular group that is helping rebuild a roof over James Rainwater’s home is part of a United Methodist youth group in Fort Worth. Giving up their summer to help rebuild homes in the Orange County area has made a great impact on Rainwater’s life and also on their own.

“It’s just a dog eat dog world and, all of a sudden, here this Methodist youth missions comes up and everything changes, and they’re willing to give up their time to come down here and help,” Rainwater said. “I was skeptical at first because I couldn’t believe something like this could happen, but it’s made a great impact on me to think that there are still people out there giving up their time to help others.”

Made up of about five to six youth and two adults, each group from the CTCYM does any help that is needed on a home, except for electrical and plumbing. Adults in the groups take several weeks off from work to go to areas and do any number of tasks, including painting walls, repairing floors and roofs, putting up decks, replacing doors, putting up dry wall, and doing yard work. Many of the teenagers, after working on one job, are more than eager to give their time for several more, some even taking part in up to eight jobs.

According to Heyduck, the CTCYM is inspired by God’s word to come together and live out faith in the world by helping others and learning from the experiences and interactions of those they help.

“It is difficult, leaving behind all the things at home and carving out time,” Heyduck said, “but every time you do it, it’s so worth it. It’s amazing to see a kid come and serve somebody else and learn about someone else’s faith, not just ministering about their own.” 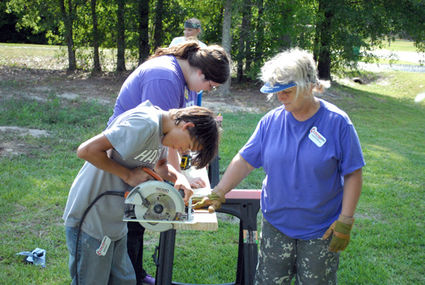 By helping out homeowners, the CTCYM help people stay and live comfortably in their homes. For Rainwater, this was of great importance because each Sunday he broadcasts a radio show from his trailer. When Rainwater was a child, his father held a radio broadcast and played guitar every Sunday morning. After his father died, Rainwater took on the radio broadcast and, with help from the United Methodist youth group, is able to do the show without worry of a leaking roof.

Currently in the Golden Triangle, the CTCYM is working on 11 other homes and is available to anyone that needs help. For those that can’t afford to pay for work, or are not able to do work on their own, the CTCYM is more than willing to give a hand, and their summer, to help restore and rebuild homes so that homeowners can get the help that so many need.

For more information, please visit their website at http://www.ctcumc.org.