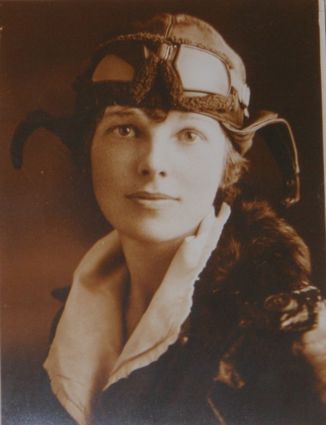 Donning a helmet and goggles, one 10 minute flight in an open-cockpit biplane was all it took. She was hooked for life. Amelia Earhart is possibly the world’s most famous female aviator. On July 2, it will be 64 years since she was last heard from over the Pacific Ocean. It was one of the last legs of her attempted flight around the world when her radio went silent.

She spent time on the lecture circuit before attempting her flight around the world.

Earhart and her navigator Fredrick Noonan started their first leg of their trip around the world from California to Hawaii on March 17, 1935.

A mishap with the plane in Hawaii delayed the trip.

They were off again, this time in the opposite direction, from California to Florida on May 21, 1937.

They skirted the northeast edge of South America, flew to Africa, across the Red Sea on to Karachi.

Their next stops were Calcutta, Rangoon, Bangkok, Singapore and Bandoeng.

A Monsoon prevented departure from Bandoeng for several days and gave time for repairs to the plane.

Earhart came down with dysentery that lasted for several days.

On June 27 the pair headed for Port Darwin, Australia. They traveled on to Lae in New Guinea. Having flown 22,000 miles of the 29,000 mile journey, only the Pacific Ocean was left to conquer.

Amelia left Lae headed east at precisely 00:00 hours Greenwich Mean Time on July 2, 1937. The last voice transmission from Earheat was received at 20:14 GMT by the Coast Guard Cutter the Itasca. It was determined that the plane went down 35-100 miles off the coast of Howland Island. President Roosevelt spent over $4 million dollars searching for Earhart using nine naval ships and 66 aircraft for 16 days. No trace has ever been found of Earhart, Noonan or the plane.