Orangefield students participate in ”Hats off For Cancer” campaign 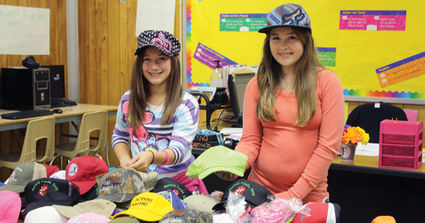 The Orangefield Junior High Student Council and National Junior Honor Society have teamed up with “Hats Off For Cancer” to raise awareness for pediatric cancer. For the past three Fridays, on each campus, students were invited to donate either a new hat or $1; in exchange, they could wear a cap during the day at school. So far the school district has raised $1,152.43 and collected 265 hats.

“This is a cause that is close to many of our hearts. We wanted to help out in any way possible. I am proud of these kids.” said Principal Preston Clark.

Two sixth graders, Alexis Sturrock and Madison Taylor, were especially motivated to make a difference in the lives of cancer patients. Madison donated 123 hats and Alexis donated 118 hats. Alexis collected the majority of her hats from her grandmother Debra Sturrock, owner of Jubi Prints in Vidor and Madison worked closely with her mother, Evelyn Taylor, owner of Center Stage Boutique in Orange, collecting hats. Madison and her mom participated in the campaign last year and plan to make it an annual tradition.

The hats and monies will be donated to Texas Childrens Hospital. The two junior high organizations will continue to take contributions until the end of October. Donations can be mailed to the campus at 7745 Sandbar Rd. Orangefield, Tx. 77639 or dropped off in the office.

“Hats Off For Cancer” collects and donates hats of all kinds to the courageous children who lose their hair due to cancer treatments.

As one of the leading and original hat programs, Hats Off For Cancer has donated more than 1.5 million brand new hats to hospitals, camps, and individuals worldwide since 1996.

The program was founded by Tara Lawrence at age 14 after losing her grandfather to prostate cancer. Attending fundraising events for cancer research, Tara met kids her age who were battling cancer. The children told her over and over again how much they hated to lose their hair. After hearing this from so many children, Tara knew she could do something to help. In 1996, she began writing letters to companies, sports teams, and celebrities asking for the simple donation of a hat. The charity received more than 1,000 hats in the first three months, and has grown in the past 16 years to help more than 1.5 million children and set up drives on five different continents.

Still run as 100 percent volunteer, all funds go directly to purchasing, storing, and shipping hats, as well as helping cancer patients’ families in need, and running the Mad Hatter drive events around the world.

“Hats Off For Cancer” is recognized by the IRS as a 501(c)3 non-profit organization.