Roots of my Irish well Dunn

Often I’ve written about the Cajun side of me, but I never have said much about the fighting side of me. That’s my Irish side.

While a kid in Abbeville, I was a strange youngster, the only person in the little Cajun town with the Irish name of Dunn. The real kick in the behind was that this Irishman couldn’t speak a word of English until I was seven, plus I still don’t speak it that well.

I was poor and endured a lot of abuse because of the way I dressed or didn’t. I didn’t own any shoes, but I had a side of me that many of the abusers didn’t know. That was my fighting side. I’m not so sure whether I fought so much of necessity or because my bloodline came from a fighting bunch of Irishmen. Purebred Irish, I might add.

My Cajun side is interwoven of German, Spanish, French and a little Gumbo. I’m not sure what you get when you breed pure Irish with those other mixtures. A strange kid, I suspect, and an even stranger adult.

Anyway the Cajun culture is so strong that, like most other folks who are exposed to it and can’t help falling into its fun-filled, spicy-seasoned trap, though I have little Cajun blood in my veins, I’m all-Cajun in my heart.

It was Abe who said, “Character is like a tree; reputation like its shadow. A shadow is what we think of it; the tree is the real thing.

So, it’s coming up on St. Patrick’s Day, and I thought it would be a good time to ‘fess up that I’m more Irish than Cajun. There might even be a little interbreed that would explain some of my goofiness.

My Irish forefathers were a hearty bunch. The Civil War had come to its conclusion in 1865. Dr. Stephen Dunn was one of the war’s casualties. Left behind were wife Sarah Jane and eight-year-old Allen.

Alone and penniless, Sarah headed to Texas from Arkansas with her son and sister-in-law. They left Searcy traveling by covered wagon and headed for Eastland County, where Sarah had a brother. The trek took most of the year and met with many hardships and delays. They camped each day where water and wild game were available.

They stayed some time at what is now Grapevine. Old maps show it as Dunnville. Arriving eventually in Eastland County, their biggest fear was marauding Indians. The group settled in Sipes Springs, near Rising Star.

Allen grew up and married Laura Dunn, 14, of DeLeon. His mother and father were both Dunns and so was his wife. All trace back to Ireland. Laura’s mother was a Blair, the daughter of C.C., for whom Fort Blair in Eastland County was named. Laura’s mother had been captured as a child by Indians; she was rescued. A historical marker indicates the site of the fort today at Desdemona.

Laura and Allen raised a family of six boys and two girls on that peanut land. Allen, at the age of 15, had become a scout and Indian fighter. He then became a trader and merchant. With a pair of oxen and a wagon, he traveled the 400 miles to Galveston. He traded furs and peanuts for other goods which he sold.

My father, Clay, said he would be gone three months, depending on the rise of the Brazos, Trinity and other rivers. He often made two trips a year.

Laura raised an intelligent and industrious houseful of youngsters. She contributed to their strength and perseverance. Every one of her children grew up to become wealthy. Dunn Bros. Pipeline Stringers started with mules and barrels at that time and became the nation’s largest.

The little cemetery on the hill was cold, windy and laden with snow when we brought Dad on his last ride. He was buried next door to where he was born. The house had been preserved by the family.

There is a fence around the ground and a nice sign that says “Dunn” where both branches of my Dunn roots are buried--Allen, 92, Laura, 86, aunts and uncles and Clay; he was only 65.

He left me and Mom behind when I was a baby. Later in life we got together and closer. I moved to Burleson County to be near him. He died a year later. I named one of my sons after my father and the original pioneer granddad, Allen. Today three generations carry Clay’s name, my son, grandson and great grandson.

I’m proud of my Irish Dunn heritage. Though I never knew my kin very well, I know of their strength. I’m now oldest of the large, two-sided Dunn clan and only my two sons, daughter, two granddaughters and I carry the name; my three grandsons don’t carry the name but Dunn blood floods their veins. As time goes by the Dublin connection gets watered down more. After this generation, there won’t be anyone to carry the name on, but this industrious pioneering heritage will live on. 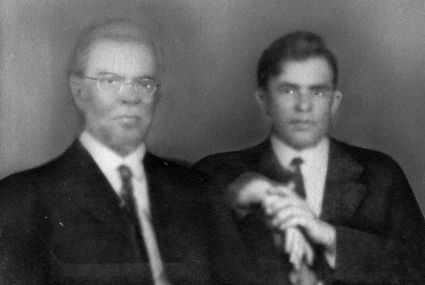 Now you know the rest of the story. Well almost, on St. Pat’s Day, March 17, 1971, I started the Opportunity Valley News. It became a very popular publication. It was luck of the Irish. On my birthday, nine years later, on June 5, 1980, I sold it to Cox Enterprise for a bunch. Later after Cox bought The Leader, they ran the OVN down the tube.

Another thing I find ironic is that my dad Clay died on Feb. 19, yet his marker, which was erected several months after his death, shows he died on March 17, St. Pat’s Day. I don’t know how or who is responsible for the error but Clay, who took so much pride in his Irish heritage, would probably smile and say, “Leave it, don’t’ change it, that’s a better day than most.” So from this swamp Irish to the rest of you, Happy St. Patrick’s Day.

Pictured above: Allen Dunn, 61, and Clay Dunn, 24, after returning from World War I in 1918. Clay fought hand to hand combat through France.