Churches band together for Unity in the Community 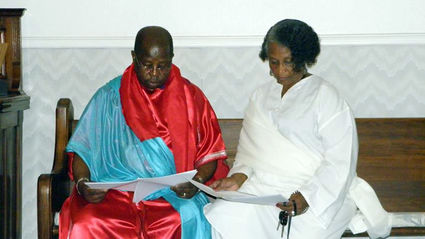 The churches came together during the recent controversy over the Confederate Memorial being built off Martin Luther King Jr. Drive. That project was dividing the community. In an attempt to bring people together, they came up with a plan to hold the joint Bible school.

“The pastors got together and agreed on it first, then they asked their members to coordinate and they did with their meeting in February,” said Vinnie Mathews-Hunter, spokesman for the event. Linda Renfro headed up the project.

“It’s been a major project, but it’s awesome,” said Mathews-Hunter. “People are volunteering that have never volunteered for VBS before. I thought I had 20, but I have at least 30, from my church.”

She said First Church of the Nazarene probably has about 40 volunteers, so she feels confident the need of 100 volunteers will be met between all four churches.

She was very excited that West Orange-Stark Elementary Principal Benny Smith agreed to play the role of Paul.

“They will be meeting Paul in the flesh. He’s a tent maker, so he will be making tents as he talks to children,” she said. “It’s so awesome! I’m so excited!”

“He’s having made a custom Biblical outfit,” she said. All volunteers will be dressed in garb of the era.

Each will be partnered with another volunteer from another church. The classes will be made up of children from all four churches to make sure they are blended together. The ministers of each church will also be involved in teaching the children.

First United Methodist Church is participating as the location of the program at 502 N.6th St.

“We’re pulling out all the stops. I like to transform churches for vacation Bible school. We’ll have a market place. It’s going to be neat. We’re setting up eight tents in that gym,” she said.

Students will also experience Olympic arena games. “There will be some athletes training for the Olympics and the children will join them, throwing the discus and javelin. It’s going to be so much fun.”

Each church will be in charge of the kitchen on a different day, offering Greek delicacies to the children. Salem UMC kicks off the week serving octopus as their delicacy. “I’ve got my ladies ready to go,” said Mathews-Hunter.

They have also taken on Garth House as their mission project.

“We have a Garth House right here. What better way than to let those kids donate to something that is here,” asked Mathews-Hunter?

The children will be asked to bring donations of office supplies, food/snack items, paper goods, toys and gift cards.

For more information call 409-988-9990, 409-883-2611 or 409-886-1291. Volunteers are still being accepted, but all volunteers must take the Safe Sanctuary course offered through the United Methodist Church and pass a background check, so contact them as soon as possible to participate.