She had a bit of swagger when she walked into the office, not the usual gate of most Southeast Texas girls. Then again, she’s not like most girls. When Kaycie Gunn heard her first sounds of a beat box, she was hooked. She was in the lunch line with one of her friends, her freshman year in high school when her friend subconsciously beat a few bars.

“Wow, that’s cool,” Gunn told her friend. It started a search for knowledge about “beat boxing” and “rap.”

Beat boxing is the art of creating a musical beat of drums and base sounds with your mouth.

Gunn said she also started writing rap songs. When she completed her first one she said, “It was awful.” But that didn’t stop her. Recently she started getting exposure at open mike nights and won a competition in Georgia in June. There were over 50 artists involved. She said the went back to the hotel to rest while the competition continued.

“The next day they called and said I won it. I was pretty stoked!”

Last weekend, she returned to Georgia to defend her title. There was such a long line of competitors, it took a while just to find out what time she was to perform. The winners were scheduled for 1:15 a.m. She said it was actually after 2 a.m. before she got to perform.

She was shocked to se BRich in the audience. He is one of the biggest Rap managers and promoters according to Gunn. Also on hand was B.o.B. and Play Boy Tre, two very popular rap stars. BRich told Gunn, “You did good.” He told her to get with Tre and they were going to start working with her and get her in the studio.

She will also be performing at the A3C music festival Oct. 6. 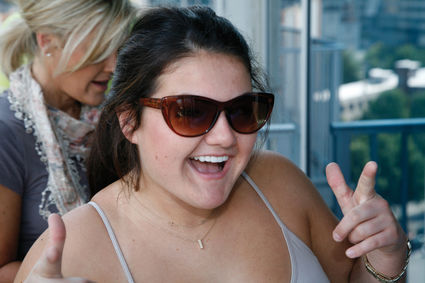 Gunn said she gets a little nervous at first when she gets on stage, but once she gets started, its as if she was just in her room performing.

She said when she really gets into it she loses her breath sometimes. “Thank goodness for ad-libs!”

If you happen to be in Atlanta Oct. 6 you can catch Gunn’s performance at the Beers and Tacos Block Party. Gunn said she is going to be practicing day and night until then. “I just love it. It’s all I want to do.”

The next time you hear a female rapper beat boxing, take a look, it just may be a southern gal from Orange County Texas.