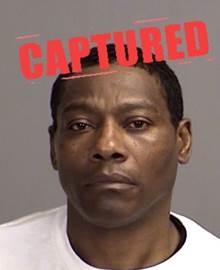 Sammy Lee Nickerson, 52, a Texas 10 Most Wanted Sex Offender, is now in custody after being arrested Thursday in Bryan. Nickerson’s criminal history includes aggravated sexual assault of a child and burglary, and he was wanted for failure to register as a sex offender and parole violation.

Tip information led Texas Department of Public Safety (DPS) Criminal Investigations Division agents to a Bryan apartment complex where Nickerson was located and arrested without incident. Since the arrest was the result of a tip, a reward up to $5,000 will be paid. For more information, see the captured bulletin at: http://www.dps.texas.gov/Texas10MostWanted/SexOffenderDetails.aspx?id=232.

There are four different ways to provide anonymous tips:

All calls, texts, e-mails and Facebook messages are anonymous.

DPS investigators work with local law enforcement agencies to select fugitives for the Texas 10 Most Wanted Fugitive and Sex Offender lists. You can find the current lists – with photos – on the DPS website at http://www.dps.texas.gov/texas10mostwanted/.

Do not attempt to apprehend these fugitives; they are considered armed and dangerous.