The state’s third ranked Bridge City Cardinals will face fifth ranked the Huffman-Hargrave Falcons in a best-of-three series in the Region III quarterfinal round of the state baseball playoffs this week.

Game One of the series starts Wednesday, May 14, at Nederland High School baseball field located on Spurlock Rd. Game Two will be played at San Jacinto on Friday. Game Three, if needed, will be played on Saturday at Baytown Sterling High School. All game times are scheduled for 7 p.m.

This makes the 16th Region III quarterfinal playoff appearance for the Bridge City Cardinals (25-3) and the second consecutive season to meet up with Huffman-Hargrave (22-4) there. Last season

Huffman escaped with a 5-4 win.

The quarterfinal series will be a classic playoff match up between two district champions. Both teams enter the contest with identical regular season records, 11-1-0. Bridge City carried the Dist. 21 championship into the playoffs and Huffman entered the playoffs the title holder of Dist. 22. Both teams prevailed in the area round last week as Big Red toppled Sweeny 9-0 and Huffman dropped Stafford 3-2.

Bridge City junior pitcher Chase Shugart tossed a complete game no hitter against Sweeny with 13 strikeouts. Shuggart also chipped in at the plate with two doubles driving in three runs during the contest.

The Cardinals struck in the top of the second inning with Blake Pruett doubling to left field to drive home Ashton Hunter. Jonah Watts singled to right and drove home Sage Elmore, who had reached on a walk.

In the third inning Shugart nailed a one-out double to left-center field and Hunter reached on an error. Bergeron then hit into a fielder’s choice. Hunter was out at second on the play but courtesy runner Blaine Slaughter raced in to score after a throwing error to first.

Bridge City added another three runs in the fourth. Pruett got on base after being hit by a pitch. Trevor Gunn drew a one-out walk and Hunter Uzzle was also hit by a pitch to load up the bases for Shugart who doubled off the left field wall driving home base runners.

Big Red put three more points on the board in the seventh inning. Hunter reached on a single and stole second. Kyle Bergeron doubles to score Hunter. Blaine Huff singled to left and the Cardinals scored two runs on RBI ground outs by both Bryce Carey and Watts. 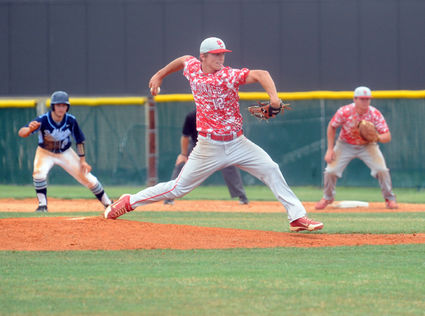 The Cardinals will face Huffman pitchers Austin Smith and Jake Harrison during this week’s series. The Falcons have given up few points throughout the season as they face the high scoring Bridge City Cardinals. The stage is set for a spectacular playoff bout.

Bridge City’s only regular season loss came from the West Orange-Stark Mustangs, 6-3. Huffman’s only loss during the regular season came from Spendora 2-1. In their next meeting Huffman defeated Splendora 1-0.

In the bi-district round the Cardinals prevailed over Tarkington taking Game One, 5-0, before dismantling their opponent 17-4 in Game Two.