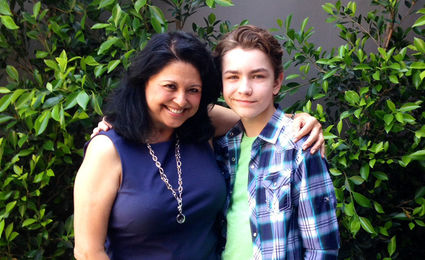 Dolores Cantu, a West Orange graduate created Candu Management 13 years ago to help guide young people in the entertainment industry in Hollywood. She is a 45 year veteran of the large and small screen with a long history of television and film credits to her name, along with hundreds of commercials.

Recently she took on management of young Weston McClelland from Orange, who moved to California almost two years ago to pursue his acting dreams.

She found out about Weston from her longtime friend Bryan Windham. “I knew Bryan since I was 14 years old,” said Cantu. “He’s the one I took to the party,” she said referring to the annual West Orange Chiefs reunion held at Mike Trahan’s home in late April.

“When Bryan knew what I was doing for a living he was telling me about Jack (McClelland).

He (Windham) is like the “fairy godfather” of Weston, because he knew me and knew I worked with kids. He’s the one that told me I need to look up this kid, that he’s Jack McClelland’s nephew.”

“On that lucky day that Bryan asked to be my friend on Facebook, who knew that Weston would be the recipient of it.”

As a manager she also looks for new projects in reality.

“I was trying to do a reality show with Bryan. The guys that live on this property are his relatives. They all fix these bikes and this and that and whatever, but you have to have a lot of energy. I told him, ‘You’ve really got to have more energy.’”

Her stable of actors have many current and upcoming projects.

The coach in the Robin William’s commercial for Snickers is Ethan Wilde. He has also played on NCIS Los Angeles.

“I have a little girl, Ariana Devitta, 6, doing store ads for Disney,” said Cantu. “Charlie Farr and Emily Mest are in a campaign for Comcast and Charlie Farr and Joe Zymblosky just did a big campaign with Mike Tyson.”

Josh Hoover has a hilarious parody of Robin Thicke’s Blurred Lines called Long Lines on YouTube that he wrote, directed, starred and edited.

Farr, Mest and Hoover can be seen this summer in “Malibu Horror Story.” A short description of the movie says in the summer of 2012, four Malibu teenagers disappeared without a trace. This documentary narrative takes a look inside one of the most bizarre and disturbing unsolved missing persons cases in Southern California.

Cantu said Michael Barbuto is shooting an upcoming series in Toronto. He also co-wrote, co-produced and co-starred in a recently released movie called “Happy Camp” produced by Drew Barrymore’s Flower Films. It’s the story of four filmmaker friends who visit the Northern California town of Happy Camp to film a documentary about the place where hundreds of people have gone missing from the surrounding mountains, including one of the pals’ younger siblings decades ago. The horror film is currently available through Netflix and DIRECTV.

Dolores’ hint for the week: If you want to pursue an acting career, you can pursue it locally and get the credits to be able to come to New York or LA later. “There is so much work in your area. There is so much work in New Orleans, Atlanta, in Dallas, in Houston, in Austin and it’s called a ‘free to work’ state, meaning that you don’t have to be a member of the union to work that area,” said Cantu.

“There is so much local talent in New Orleans and Texas and they are hiring people. There are agents also, big agents, in these local towns in Texas that you can start there. If you’re young and you want to come here (LA) and you’re afraid, you can start locally and try to see if you even like it. At least you are not far from home, and then you can say ‘I’m going to make it a career’ or not. People don’t have to be afraid to make that big leap to California, because there is a lot of work locally.”

You can contact Dolores Cantu or Candu Management by private message on Facebook or by e-mail at dcan2@ca.rr.com.