When Weston McClelland of Orange was around 4 years old, he was watching the Disney Channel after school one afternoon and said, “I can do that. I can be one of those kids.”

Weston, who turns 11 Thursday, said he has known he wanted to be in entertainment as far back as he can remember.

“I would say I knew 100 percent when I was five, after I performed a hip-hop dance routine at the Lutcher Theater.” He took part in the annual Orange Jazz Company concert at the request of his then dance teacher, Lorna Badon.

“The audience’s reaction after my performance that night sold me. I felt so good and knew I wanted to entertain people.”

Weston continued to emphasize his desire to be on television. His parents, Michelle and Wes McClelland decided they needed to figure out how Weston “could do that.”

“In the spring of 2008, we contacted a small boutique talent agency in the Houston, Texas area that signed him to a modeling contract,” said his dad.

Weston began working immediately for Academy Sports & Outdoors in print ads and television commercials. His first job for Academy was a nine and a half hour “Back to School” commercial shoot in Houston for kids’ backpacks and shoes.

“He absolutely loved the experience and knew then he was destined to be in the entertainment industry,” said Wes.

Other projects for Academy at the start of Weston’s career included an Under Armour Christmas TV commercial, a front page Fathers’ Day print ad and July 4th print ad campaign.

After two years, on the advice of Weston’s then agent, his parents decided to fly to California in the summer of 2010.

“Father’s Day to be exact,” said Wes. “We stayed in the Burbank / Glendale area for 10 days, allowing Weston and our family to meet with several well known talent agencies, including the world renowned Ford Models.”

Wes said that all of the agencies agreed young Weston had the goods to be successful in the entertainment industry, but to do so, they should move to the Greater Los Angeles area.

Wes and Michelle immediately committed to selling their Texas Historical home in Old Orange and head to California in pursuit of Weston’s dreams.

“It was not an easy decision to move to California. It meant leaving family, close friends, baseball teammates and his beloved teachers and school at West Orange-Stark Elementary,” said Wes.

Weston continued to work in Texas for the next two years, building his resume, while his parents prepared for the move to California. After Weston completed the 3rd grade, everything was in place for the next adventure.

“In July of 2012 we moved to Burbank, Calif. We arrived July 12th and will soon celebrate our 2nd anniversary living in SoCal,” said Wes.

When they registered him for school in Los Angeles, classes of near 40 students was a bit overwhelming for the fourth grader from Texas.

“Thankfully, due to my successful auditioning and active work schedule, it allowed me to attend CAVA (California Virtual Academy). I’m home schooled and love my CAVA teachers,” said Weston. “I take online classes daily, same as many college students. I have a private teacher I meet with weekly to go over my assignments. Also, my mom works with me daily and ensures that I’m on track to meet all CAVA requirements.”

Weston has worked steadily since they arrived and loves it. He has been on many auditions, working with a talent agent for modeling and print work; and a separate one for acting.

When he is on set, he has a set teacher. Typically there is one set teacher for every 10 students. He just completed the fifth grade.

“I’m excelling in all my studies, especially math and science, which I love!”

While in California, Wes works for BMW doing Internet marketing to support the family and Michelle stays with Weston making sure he gets his school work done, gets to auditions on time and just being his mom.

“We are not his agents or managers, we are his parents and support him,” said Wes.

Wes said there is a major distinction between an agent and a manager. An agent sends you on auditions. A manager guides your career, making sure you are doing the right projects.

This summer, Cantu will be working towards Westin’s eligibility for a Screen Actors’ Guild (SAG) Union card.

“Once he gets his SAG card he can start working on the really big projects,” said Cantu. She said besides a healthy raise in pay, a SAG card can get you health benefits and a pension.

The Texans connected in California through a conversation of Weston’s great uncle Jack McClelland, formerly of Orange, and Jack’s longtime friend, Bryan Windham of Mauriceville. Windham is also a good friend of Cantu.

According to Wes, his Uncle Jack and Windham were talking on the phone in March. Jack began bragging about Weston’s recent acting accomplishments. Cantu’s name was mentioned and the two men thought it would be a great idea to refer Weston to her.

Wes said they met with Cantu in her home and after several meetings, they entered into an agreement for Cantu to manage Weston’s career.

Cantu laughed and said she is going to start referring to Windham as “the star maker” after facilitating the connection.

“What’s really great is Dolores wants to hear from Weston himself after he goes on an audition,” said Wes. “She’s really good at communication.” Weston loves that he can just call her up when he wants to and talk to her.

Has the Hollywood experience lived up to Weston’s expectations?

“Yes, absolutely and then some,” said Weston. “Having worked as a model and in TV commercials since I was little helped me with my confidence going up against other talented kids here.

“I have a passion to entertain and as long as I keep God first and stay focused on my dreams, things will work out for me eventually. I realize this is not a race,” said Weston. “I’m dedicated and in it for the long haul. It’s not a question of if I’ll make it, but when.

Weston said he feels blessed to have parents that sacrificed their work and careers to allow him to pursue his dreams.

“It’s hard work for sure. I’ve dedicated myself to all types of training.” Besides acting, hip-hop and voice-over classes, Weston also has a dialect coach. 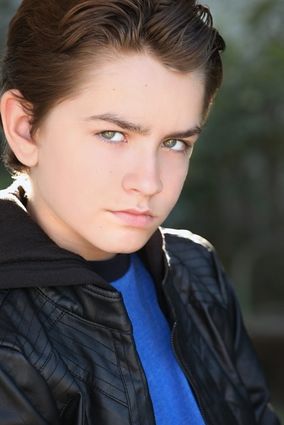 “Although I sound more West Coast now, I can still slide right back into my Texas accent whenever I want,” said Weston.

Currently, Weston is featured in an American Greetings eCard and commercial for Father’s Day and has completed at Country Time Lemonade commercial that should start airing sometime this summer or fall and currently can be viewed online.

“My big break is right around the corner and I can’t wait to share it with all my friends and family back home in good old Orange, Texas!”