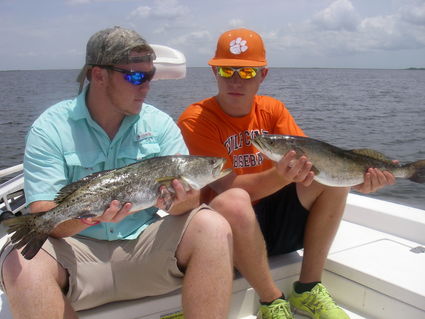 “The number of entries is down a little this year,” stated John Thomas while directing traffic with a clip board in one hand and shaking the hand of a young angler with the other.“Our sponsors stepped up big again this year and as you know….the biggest worry outside of raising money is the weather.”

Mother Nature cooperated as well with clear skies and enough of a breeze to make the 27^th OCARC weigh-in reasonably pleasant for the spectators gathered at the Orange City Boat Ramp.There was a winning fish in every category and all three places were claimed in all but the white perch division.There was some concern prior to the event that the high water would make it tougher on the fresh water fishermen.

The big four, (bass, flounder, redfish and trout), were all worth $250 and it took a good fish to win in every category.Luke McFarlane cashed the first place check in the bass division with a very solid 3.19 pound fish.Charles Cobb won the flounder division with a 3.83 pound fish, Sam Michael blew away the field with a 6.04 pound trout and Forrest Gothia won the redfish division with a thick shouldered 27-inch fish.

Craig Stark also made a big pay day by catching the winning Appaloosa red.That is the designated name for the redfish with the most spots and his fish had nine!

Not surprisingly, Eddie Forgey once again took home the money for duping the heaviest Don Hubbard Mudcat.Even when he doesn’t win this category he comes close to winning it and this year’s winning cat weighed 3.86 pounds. The big four always attract the most attention, but there is no doubt that this tournament is all about the smile on the faces of the youngsters as they parade across the stage and spending an afternoon visiting with the clients from the Center.

The 27^th edition will also go down as an especially memorable one as center director, John Thomas, opened the weigh-in ceremonies with a tribute to Andy Borel and his family.Andy recently lost his ten year old daughter, Janae, in a boating accident on the river.I can’t personally recall Andy ever missing a single OCARC tournament and I know he fished this one with a heavy heart.

A number of years back when we were constantly tweaking the rules to produce more winners and get even more kids involved, someone foolishly proposed dropping the grinnel category.Thomas immediately dashed that proposal by stating with conviction, “As long as Andy or any of the Borels are fishing this tournament we won’t have to worry about not having a grinnel to weigh. ”Saturday afternoon, Thomas paid tribute by announcing that in all future events that category will honor Janae Borel.

I will have more details about a great opportunity for local anglers next week, but anyone interested in learning a little more about all the things their GPS/depthfinder unit will do should make plans to visit Simon’s Outfitters on Mac Arthur Drive on August 15^th . Representatives from Navionics will not only be on hand to answer any and all questions about your electronics, but will run your unit on the river with you as well.

There will be vendors on hand as well as a Kids Fish tank and refreshments.You really need to stop by the store at 2313 MacArthur Drive prior to the event and talk with Jonathan as there is much more to take advantage of than mentioned here.

While the rain and big tides haven’t done us any favors lately, lighter winds have allowed us to fish more of the lake.The most surprising bite has been provided by the flounder.The best flounder bite as of this week has been found either in Bessie Heights, Keith Lake or the ship channel south of the Causeway.

Keith Moran would add the Neches to that list as he limited four days last week and had at least one fish over four pounds every day.He caught them on a new penny Gulp Shrimp and live finger mullet.The redfish bite has also been very consistent for folks fishing crankbaits, Swim Baits and spinnerbaits on the river.If you are fortunate enough to find them schooling in the lake you can catch them on anything in the box.

Ironically enough we have done very well on the trout both south of the Causeway and on the extreme north end of the lake while struggling on the main lake.We are still finding big pods of shad in the open lake, but most of the gulls are working over lady fish, sand trout and small specks.Topwaters, Swim Baits and tails fished under a cork have all worked well for us.

Blake and Andrew enjoyed one more trip before football started on Monday!