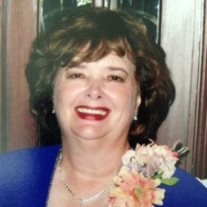 Kay Ellen Brake was born Aug. 16, 1943 in Hutchinson, Ks. Her father left when she was a baby. But she was fortunate to soon become a member of the Heller family with her brother Greg Heller (wife Cee) and sister Michelle Heller Barron, and was raised by a loving extended family.

She met Stonie O. Clay while he was in the Air Force; they married and had three daughters: Julie Devlin who recently moved to Houston (sons Jacob and Parker); Dianna Wimberley, a long time resident of Orange (husband Mark, daughters Jessica Wimberley and Katelynn Garza), and Kim Ramshur a resident of Woodville (son Richard, daughters Lisa and Amanda Chaddick). After many years of marriage, Stonie passed away.

Kay continued her work as an Emergency Room RN at Orange Memorial Hospital, traveling, enjoying grandchildren, and picked up square-dancing.

When she wasn't planning Christmas—that few months in the spring, Kay and Raleigh traveled as often as they could, watched old movies together, attended parties and dances, helped at Some Other Place, and attended the milestones of the family children.

Kay's stroke only slowed her mobility; she still managed to get that last word in. Though she was not able to communicate with words, she kept those facial expressions we all know and she taught us some new sign language. The most prominent was when we were playing calming music and she would hold her hand up and start to Jitter-Bug. We knew we had better pep up the music and fast!

Throughout her life, she proudly displayed the scar she got from catching her leg on the barbed wire fence when she successfully caught the fly ball, didn't mind showing the photo of her getting back on the horse after she had been thrown, denied screaming like a girl when she went white water rafting down the Snake River, and was a trooper when she discovered the toilet on the night train to Istanbul was open straight to the track.

Kay's body did not deserve her spirit. When her body began to betray her, she continued her adventures with cruises and time-shares. The motorcycle photo in the slide show is the last photo taken before her stroke. She was an adventurer to the end of this life and probably adventures on even now.

We thank everyone for sharing in Kay's adventures (don't be fooled, you just thought you were leading) and ask you to memorialize her spirit each time you try something new, with a little "This one's for you, Kay."

In lieu of flowers, please donate to The PKD Foundation or The Shriner's Hospital of your choice. We send a special bless you to the day/night staff of Harbor Hospice on Major Drive.