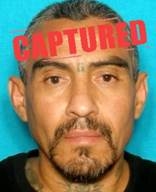 John Guevara, 48, a Texas 10 Most Wanted Fugitive, is now in custody after being arrested Tuesday in Victoria. Guevara, a known Texas Mexican Mafia gang member with a violent criminal history, was wanted for parole violation. The arrest was the result of a tip, and a reward up to $7,500 will be paid.

Following tip information, Department of Public Safety (DPS) Criminal Investigations Division agents located Guevara at a Victoria residence, where he was arrested without incident. For more information, see the captured bulletin at: http://www.dps.texas.gov/Texas10MostWanted/capturedDetails.aspx?id=257.

So far in 2014, DPS and other agencies have arrested 18 Texas 10 Most Wanted fugitives, including nine sex offenders and seven gang members, and $48,000 in rewards has been paid for tips that resulted in arrests.