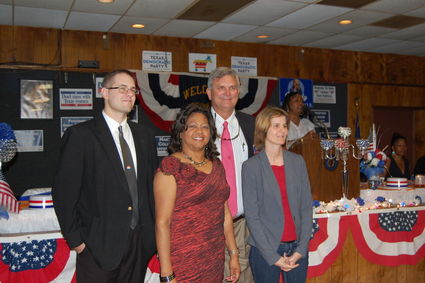 There were some sparks flying at a routine political rally in Orange last week.

Gavin Bruney, the Democratic candidate for State Representative District 21, said at 2014 The Orange County Democratic Gala on Sept. 20 his Republican opponent, Dade Phelan, filed his paperwork to run while he wasn’t residing in the district.

Bruney added that state law reads a candidate must live in the district for one year before filing. He added he has evidence Phelan resided in District 22 at the time instead of District 21.

“He did not live in District 21 when he filed on November 4, 2013,” Bruney said during his speech. “The law says you have to live in the district for one year. I have evidence he's still living in District 22. His slip is backdated for October 29, 2013. He's lying about his application. He's what we call a carpetbagger. He's been lying from the beginning.”

He went on to say Phelan has much name recognition because he works for Phelan Investments which own properties in Jefferson County and Orange County.

“He has a case of affluenza,” Bruney said. “He thinks he's entitled to this because he has millions of dollars. He's not concerned with the working people of Orange County and Jefferson County. He has a personal agenda of advancing their cause.” Bruney also included his professional, educational and family background to the audience and said he would work for the citizens in the Legislature in Austin.

Phelan responded during a telephone interview his opponent in the Republican primary, Judy Nichols, also said he lived in the wrong district and she was wrong then just as Bruney is wrong now. Phelan said he hired an outside attorney to investigate the matter. The GOP hired their own attorney to look in as well and found no wrongdoing.

He explained the street he lives on in the West End of Beaumont is split on one side as District 21 and the other side as District 22. “It is patently, ridiculously untrue,” Phelan said. “I don't know who started it. If I was illegal they would had kicked me off the ballot. “I have not talked about my opponent and I wish he would talk about the issues for Southeast Texas.”

In other candidates' speeches, Gail Barnett, candidate for Precinct Justice of the Peace, said she didn't plan to run for the office of justice of the peace, but God had plans for her to run. She said she has a background in family court, a municipal court judge, a prosecutor and private practice.

She said her opponent, Republican incumbent, David Peck, said Barnett is using the justice of the peace office as a stepping stone. She replied, “You're never overqualified to serve God.”

Barnett added a responsible judge looks at the law and the facts.

She gave as an example of issuing exorbitant fines to parents of children who have run-ins with the law. She rhetorically asked if those fines solve the problem in which she answered no. “You can't have cookie-cutter solutions to any problems. You have to think outside the box and tailor solutions for each case,” Barnett said.

Kathy King, Democratic candidate for the Texas State Board of Education, District 7, said she has worked with children and young adults for 13 years as an occupational therapist in classroom settings as well as being a mother of five.

Her main goals in the race are to revamp educational standards to be more functional and to receive teachers' input on standards.

She gave an example of her opponent, incumbent David Bradley, literally turning his back on a group of English teachers when they tried to give their input. “Who better knows their subject matter than someone who teaches English than an English teacher?” King asked.

“Kids need to learn facts; not opinions based on political agendas,” King said. “These are our future leaders. We must give them better than that. This is a very important election.”

Michael Cole, candidate for the 36th Congressional district, began his speech by calling America a land of promise and gave historical examples of Democrats who made it so. He then gave a metaphor of contemporary complacency as a desert, but a way to head back to the “river.”

Cole said the nation is not sold to the highest bidder, but is open to each and every American. He then have examples of Democratic-led legislation such as Social Security, health care, the Great Society and the Moon landing to name a few.

Cole concluded his speech by saying many think it doesn't matter if they vote, but many great people in the past fought for the right to vote. John Baker, IBEW member and former vice president of a AFL-CIO chapter, spoke on unions and the community. He said prior to unions, workers would spend 60 to 70 hours a week, six-and-a-half days a week, on the job. They would often get hurt, maimed or killed on the job. Baker said only 10 percent of the population is in organized labor, but he thinks that will increase over time. “Work connect us all,” he said.

Pictured are the candidates who spoke at the event. They are from the bottom left, Gail Barnett and Kathy King; top left: Michael Cole and Gavin Bruney.