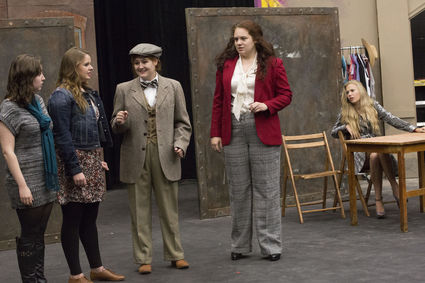 In the tradition of great backstage comedies, “Anton in Show Business” conveys the joys, pains and absurdities of putting on a play, in this case, Chekhov’s “Three Sisters.” The play’s main characters, three actresses who come from diverse backgrounds and varying levels of success, find themselves thrust together in a small regional theatre in San Antonio. The experiences of this fictional trio of women, Holly, Lisabette and Casey, spotlight real issues in the world of American theatre.

“We see how their lives mirror the characters in the play, and how life imitates art which imitates life,” said Brian LeTraunik, instructor of theatre and the play’s director. “It’s the great circle, and the metatheatrical aspects of the play bring that to life in a fun way. Being a backstage comedy, it offers a glimpse into the world of theatre that the audience doesn’t usually see, everything from temperamental directors to overly sensitive theatre owners and diva actresses – all of those wonderfully fun clichés.”

“I think our audience will really enjoy this play not only because it’s a great inside view into the offstage drama of theatre, but also because it’s a heartfelt play that speaks to anyone who does something out of love and passion for it rather than monetary reward,” said LeTraunik.

Performances of “Anton in Show Business” will be in the Studio Theatre, inside the University Theatre building, located at 4400 S. Martin Luther King Jr. Parkway on the Lamar campus. Showtimes are 7:30 p.m. Oct. 2 through Oct. 4, and a 2:00 p.m. matinee on Sunday, Oct. 5. Tickets are $15 for general admission; $10 for senior citizens, students and LU faculty/staff; and $7 for LU students. The play runs approximately two hours with one intermission.

Call (409) 880-2250 for reservations and additional information, or visit lamar.edu/theatre.