One of the more unusual lighted Christmas decorations around Orange is the cannon on the lawn of the Orange County Courthouse. The venerable old artillery piece has been mounted in concrete and sitting in the same place for decades. Someone decided that it would look good with white and red lights. White lights surround the concrete base and the bronze cannon is wrapped in red lights.

The cannon was manufactured for use in the Civil War, but not much is known about where or when it was used. Dr. Howard Williams in research for his book “Gateway to Texas” found that information about the cannon is stamped around the muzzle. Williams also gave the story of how the cannon came to be a part of Orange history. “1863” is the date of manufacture. “1200 pounds” is the weight of the barrel. The initials “J.T.R.” are the initials of the inspector. “Revere Copper Company” is the company that cast the bronze cannon barrel. This is the company that was founded by Paul Revere.

It is a “12 pounder”; a cannon that fired a ball weighing 12 pounds. It is a model 1957 bronze howitzer commonly known as a “Napoleon style”. These cannons were the workhorses of the Civil War and hundreds were used by both the Union and Confederate sides.

After the war ended, Orange was occupied by troops of the 37th Illinois Infantry that were sent to the area from Houston. When the Reconstruction ended and the army left, the military in Orange was transferred to the Texas State Militia. The militia unit became “The Orange Rifles.”

In 1889 Captain E.I. Kellie of Jasper County formed the Jeff Davis Rifles as the militia company there. Kellie wanted some ordinance for the unit and contacted former Confederate general Wilburn H. King, serving as the Texas Adjutant General. King had the 12 pound cannon sent to Kellie in Jasper. The cannon was occasionally fired when the militia company had maneuvers, or for civic celebrations. 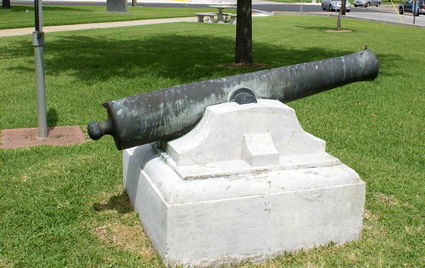 The Jeff Davis Rifles came to Orange on July 4, 1906. They were in Orange to stage a mock battle at Anderson Park. As the cannon was loaded there was an explosion and the ramrod was shot through the hand of First Sergeant W.C. Blake. The wound resulted in the amputation of Blake’s hand and arm. Blake was a well known and well liked citizen of Jasper who was the editor of the Jasper Newsboy, the local paper.

The demoralized Jasper Troops wanted nothing more to do with the cannon and left it were it sat after the accident. The cannon was taken over by the Orange Rifles. There is no record of whether it was ever fired again. At some point a large steel screw was installed in the touch hole, so it could never be fired again. It sat until the carriage began to rot away. A concrete base was designed and built on the lawn of the old courthouse. When the present courthouse was built, it was moved to the front lawn facing Division Street.