According to the 2010 U.S. census, less than 0.02% of Americans live to be centenarians. Actress Patricia Morison joined that exceptionally rare group last month when she turned 100.

“I had a party with dear friends, that was all I wanted,” Ms. Morison said from her Los Angeles apartment. “I even sang a couple of songs.”

Morison, a mezzo-soprano, is best known for her stage work, especially her role in Cole Porter's hit musical “Kiss me, Kate” which ran for over 1,000 performances on Broadway from 1948-1951.

Yet, when she moved to the West Coast to work in film in the late '30s, Hollywood never took advantage of her voice. “I screen tested with MGM, but Paramount picked me up.”

Unlike many actors of the day, Morison kept her own name which Hollywood probably found appealing with its unusual spelling – only one R.

“My father would say his family came from the northern Hebrides and were too stingy to put two Rs in Morison!”

With her striking beauty and long, dark hair – down to her knees at one point – Morison was often cast in femme fatale roles.

In “Dressed to Kill,” the final pairing of Basil Rathbone and Nigel Bruce in the 1940s Sherlock Holmes film series, Morison played a treacherous seductress attempting to dispatch her real-life friend, Rathbone.

“He was a lovely man with a dry sense of humor and Nigel Bruce, who we called Willy, was just adorable,” she recalled.

“At the end of the picture I shoot my costar, Leon Ames,” noted Morison. “About 5 or 6 years ago, I was on a Mediterranean cruise and at the dinner table one evening a man looked at me and said ‘You killed my father!’ He then introduced himself as Leon Ames’ son!”

In 1947, Morison tackled the loincloth-clad jungle hero Johnny Weissmuller in “Tarzan and the Huntress.”

“Johnny was beautiful to watch, whether just standing or gracefully swimming. I didn’t socialize with him much as he was too busy with a new love affair.”

While the film used stock footage for many African scenes, there were animals on the set.

“I remember the chimp going berserk, tearing around the set trying to beat up the crew. We had to hide in our cars until he calmed down. They also used an old MGM lion. It was very hot on the set, so the big stage doors were opened to let in air. Then suddenly, the lion disappeared. We found him walking down La Cienega Boulevard with people fleeing in all directions.” 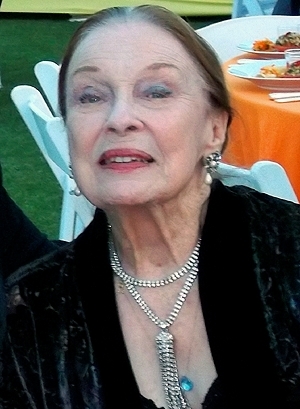 Morison’s apartment, where she has lived since the 1960s, has been home to more manageable critters, including dogs and birds. Her last pet was a cockatiel that would perch on her head and sing.

“I can still sing, too,” she laughed, referring to her performance at her recent birthday celebration.

“When you consider I’m 100, I probably should only be able to croak! But I’m a very fortunate woman. I’ve done what I wanted with my life and worked with some wonderful people along the way.”

Nick Thomas teaches at Auburn University at Montgomery, Ala., and has written features, columns, and interviews for over 550 magazines and newspapers. Follow on Twitter @TinseltownTalks.