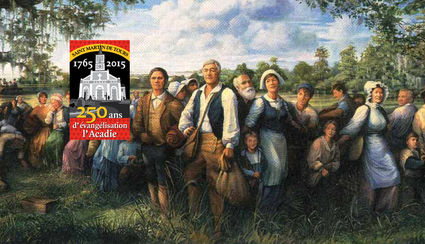 Jennifer Clarke - For The Reord

"A 250 year event doesn't happen often," says Ron Jackson of Bridge City. Jackson and Judge Carl Thibodeaux, along with their families and friends will attend the Fete Dieu du Teche on August 15, 2015.

They look forward to sharing their experience with others. Judge Thibodeaux notes the Fete Dieu du Teche “is important for Cajuns as well as the Catholic church.” Thibodeaux says he looks forward to spending the time with friends and family because, “well, it is a Cajun thing: you are always happiest among friends.” Jackson notes "a significant Acadian ancestry in Southeast Texas," and this event celebrates the fortitude and faith of the Cajun and Catholic people who endured Le Grand Derangement, The Great Expulsion, which began in 1755.

Jackson recounts, "people of French ancestry were exiled by the British because of Catholicism," as the English pushed for allegiance to the King of England despite the objections of the French. The French settlers had created viable land in areas where it had formerly been unusable. Land was confiscated, families were separated, and belongings were abandoned as the exiled boarded ships. While some ships sailed to France, others set out in search of American colonies that would accept them.

Aided by the acting Spanish Governor, the original settlers were accompanied by Father John Louis Civery, a French Catholic priest, and he named the area, La Nouville Acadie, The New Acadia.

The church has stood for 250 years, and Jackson recognizes the celebration of the Cajun people who struggled and endured and "were grateful to God for what they were given." He notes the history of the Mississippi River as connected to the survival of the exiled.

When the French settled the area, they called it The River of the Holy Spirit.

They did not inhabit the most hospitable terrain, but The River of the Holy Spirit provided them opportunity to survive.

The river was later renamed The River of Immaculate Conception by the Spanish prior to the Louisiana Purchase when the U.S. renamed it the Mississippi River.

Accordingly, many of the foods we know today, such as gumbo and crawfish, evolved out of the settlers having to eat whatever they were to catch or gather together. And while the foods may not be identical to their original form, seeing the cultural influence of the Acadian ancestry in Southeast Texas is clear in the cuisine. The exile lasted until 1763, and more than 10,000 people were affected. The settlers lived a hard life, but as Jackson notes, this celebration also recognizes their determination and faith in God.

The Church of St. Martin is the foundation of St. Martinville and an agreement was made that landowners would pay "an annual and perpetual" rent to the church's congregation. Because of the growth of this agreement, St. Martinville became the sixth city to be incorporated under the laws of the state. The church received its historical marker in 1972, and the city of St. Martinville followed in 1983.

Notably, Longfellow brought attention back to the expulsion in his poem, "Evangeline," published in 1847. St. Martinville was the setting of the poem, and an oak stands in the town named "The Evangeline Oak," commemorating this poem which tells the story of two lovers separated by Le Grand Derangement. Whether the lovers ever existed is debatable, but the tree stands within walking distance of St. Martin Church. "Acadian Reminisces: The True Story of Evangeline," published in 1907, brought further attention to St. Martinville. The park in which The Evangeline Oak stands was the first park established in the Louisiana State Park System.

Judge Carl Thibodeaux looks forward to the celebration with anticipation. He was born in Louisiana, and while he was not previously familiar with any celebration prior to this, he is excited about “the celebration of the Cajun culture and the Catholic Church occurring on the same day.” He is most eager to experience the Benediction of the Holy Eucharist which “will be shared with each church. It is the body and blood of Christ,” and the lead vessel will carry the Bishop during the procession.

To commemorate the 250 year history of St. Martinville, Bishop Jarrell of the Diocese of Lafayette approved a Eucharist Procession along Bayou Teche.

Boats will assemble at the boat landing in Leonville.

at St. Leo the Great Catholic Church in Leonville with Bishop Provost of the Diocese of Lake Charles as Mass Celebrant.

Then there will be a procession to the boat landing.

The procession of boats will stop in Arnaudville, Cecilia, Breaux Bridge, and Park ending at The Evangeline Oak in the Longfellow-Evangeline State Historical Site at St. Martinville.

The boat procession will be followed by a visit to St. Martin du Tours Church for a Benediction before continuing on to Our Lady of Sorrows Chapel on Main Street for a final Benediction.

The general public is invited to line the banks of the bayou and greet the procession as it passes.

Parishes, Knights of Columbus councils, Crusillo groups, and religious communities are all invited to register boats for the procession. Information may be obtained through Father Michael Champagne, CJC at 337-394-6550, or through email at [email protected]

To view information about the celebration as well as the history of the Church of St. Martin, visit their webpage at http://www.saintmartindetours.org/