Photo: The Bengal Guards of Orange and the Red Hussars of Port Arthur, musical marching bands from two high schools, marched towards the Cow Bayou Bridge from opposite directions and met in the center of the span for the ribbon cutting.

Jennifer Clarke - For The Record

The namesake of a city must hold significance. And certainly a city known for its strength and endurance is the perfect setting for the movement to preserve its history through the restoration of a symbol of growth, trade, and development. Bridge City is keenly aware of the concept of coming together. After all, the community has weathered storms and come out stronger than the winds that battered it.

So it is no surprise that when an essential part of the history of the community was in danger of being forever altered, that members of the community stepped up to speak on behalf of preserving the integrity and significance of a national landmark.

Kitty Henderson, of the Historic Bridge Foundation, a national advocacy foundation for bridges, states, "It is important to talk about the fact that the champions of the historic bridges have to be the members of the community.

If they care about the bridges and want to see them remain, they have to be on the front lines fighting to save their bridges." And that is exactly what a local citizen's group, the BC Citizens for Historic Preservation, decided to do.

They were determined to meet with city and county officials to get the Cow Bayou Swing Bridge rehabilitated.

The ribbon cutting ceremony rededicating the bridge occurred on August 14, 2015 and was open to the public. An operational demonstration of the bridge was done for those in attendance. After seventy five years, a community proven in its efforts to rebuild, came together to rebuild the historical Cow Bayou Swing Bridge.

The Historic Bridge Foundation started in the late 1990s as a Texas organization and expanded to a national organization within a few years. The Foundation works closely with departments of transportation when they are notified about a historic bridge in danger of being torn down. According to Henderson, there are requirements for a bridge to be classified as an historic landmark. "It must be a minimum of fifty years old, and it must be assessed by TXDOT and the Texas Historical Commission to ensure it is significance and retains a sufficient level of integrity."

Henderson was contacted by Mark Dunn representing the citizen's group in 2006, she enquired with the Texas Department of Transportation to determine if they were going to replace the bridge. "Local engineers were talking about replacing the bridge,” according to Henderson, "but TXDOT in Austin said there were no plans to replace the bridge." She and Dunn began to talk to local officials and area engineers to bring attention to the importance of the bridge because the bridge was eligible for the National Register of Historic Places as one of the few swing bridges in Texas.

Henderson notes, "In general, across the country, we are losing historic bridges at a pretty rapid rate. In particular, movable bridges are being lost because they have complicated mechanisms, and the parts are not always taken care of as well as they could be. To have a movable bridge remain in service is important. It tells us about engineering history, and why certain types of bridges were developed."

Bridges are a necessary component to the survival of this area, and in fact, it takes several bridges to access Bridge City, she said. Henderson suggests, "These bridges helped residents access other communities and develop trade." The construction and development of bridges has played a role in the evolution of the history of the entire town. Prairie View, as Bridge City was formerly known, was accessed by the Dryden Ferry over the Neches River and drawbridges over the Cow Bayou at East Roundbunch and Orangefield for trading. Cow Bayou was essential for this access throughout the 1800s.

The Rainbow Bridge (originally the Port Arthur-Orange Bridge) was completed in 1938, according to a prior Record article. The following year construction began on the ‘Cow Bayou Bridge’, a swing bridge with an electric motor. Both bridges where marvels of American technology in the years leading into World War II, as they are today. The swing bridge at Cow Bayou was the final link in “Hug-The-Coast Highway” between Corpus Christ and Orange-- the then new Texas-87.

The swing bridge over Cow Bayou brought about the consolidation of the Prairie View and Winfree school districts to become Bridge City I.S.D. The bridge was a routine part of life in early Bridge City. Near it, community, commerce and industry flourished to become the city of Bridge City in 1970.

At the time of its original construction in 1940, the swing bridge cost $386,000 and included six miles of highway toward Hwy 87. Refurbishing the bridge was done in three phases. The project cost a total of $2.55 million dollars, and the restorations made focused on repairing the bridge while keeping the components historically accurate. The Texas Department of Transportation worked with Keith Ferguson to develop and rebuild the bridge. The technology used to build the original bridge was inspired by the technology used in the shipping industry.

Keith Ferguson, contractor on the restoration, noted the rebuilding of the swing bridge was not without its challenges.

In order to maintain the historical value, "old parts had to be used, but the bridge had to be to code," and despite codes being significantly different over the years, the crew on the bridge tackled the daunting task of retrofitting the 1940s construction.

Ferguson said he was thrilled to take part in this project.

He has repaired bridges and aided in the construction of parks around historical bridges, but "the movable parts were a real challenge, and the bridge couldn't be updated to current technology with electronics and computers." Even the sidewalk is comprised of portions of the past and present, and attaching a metal sidewalk to a concrete bridge presents its own set of challenges with expansion and buckling.

There has not been regular boat traffic since 1960, but the swing bridge is a rarity.

And according to Henderson, "Celebrating historic bridges will bring people to see them." The Cow Bayou Swing Bridge is one of only two existing swing bridges in Texas.

And in some places, historic bridges are being set aside; they can still be viewed, but they are not operational.

It is also a part of the birth of Bridge City.

"This bridge joined so many communities and is very significant to history," says Ferguson.

He got to spend time on the bridge and really dig into its history.

Ferguson found an old bottle from the time the bridge was originally constructed, was thrilled to see it turn on its own power, and to be part of breathing "life back into something was a big deal" to him. 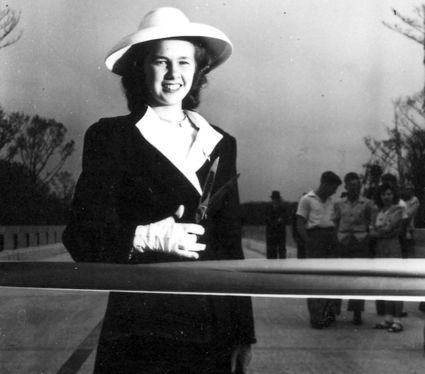 An estimated 3,000 people attended the 1941 dedication of the Cow Bayou Swing Bridge. Serving as Master of Ceremonies for the bridge dedicating festivities was then Orange County Judge F.W. Hustmyre. The ribbon was cut by Miriam David, the daughter Jewel David the president of the Orange Chamber of Commerce. The Bengal Guards of Orange and the Red Hussars of Port Arthur, musical marching bands from the two high schools, marched towards the Cow Bayou Bridge from opposite directions and met in the center of the span for the ribbon cutting.

In August, 1940, about 3,000 people attended the opening of the Cow Bayou Swing Bridge. And while this bridge may pale in comparison to the larger structures that now surround it such as the Rainbow Bridge and the Veteran's Memorial Bridge, those who have lived in this area know the importance of this bridge. "It is great the bridge has been cared for. That is what we need across the country, to recognize that historic bridges are a member of the community, they teach us about bridge engineering and create tourism," says Kitty Henderson.

Not only did the swing bridge contribute to the flow of trade and commerce, and the birth of a community, there are very few inhabitants of this community without memories of the bridges. While the swing of the bridge was commonplace for many of the elders, the children of today marvel at the movement as a boat moves through. The bridge is more than a symbol or a namesake. It is part of the memory, the heritage of an entire town.

Recognizing and preserving the importance of the bridges that impacted the growth and development of Bridge City aids in preserving its history. In 1995, the City Council adopted the official motto, "Building Bridges Together." The very identity of the town, the culture and life within it, all of that was built upon the bridges that surround it.