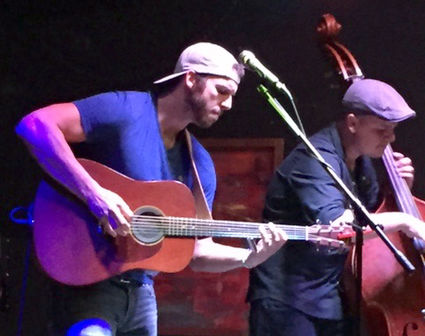 Hunter Tynan Davis, left, is a Port Neches native and a former Orange resident. He recently played in Beaumont in support of his EP, "You Are Here." He's been spending his time touring, writing songs and recording. To his right is bass player and best friend, Daniel Hyberger.

David Ball - For The Record

Singer-songwriter Hunter Tynan Davis is making a name for himself in the music industry, but coming home to Southeast Texas is still a thrill to him.

The Port Neches native and former Orange resident played a show on August 21 at the LogOn Cafe in Beaumont to a packed house.

"It was fantastic. We had the biggest turnout. It was an unbelievable experience. We've seen a lot of people," he said. "It's good to play here in Beaumont instead of only Houston."

Davis now lives in Nashville and he's on the road touring in support of his EP, "You Are Here." And by the way, this isn't his first time playing the LogOn.

Davis started playing there when he was 13 during open mic night. His dad, Shaun Davis, has also played there.

The next night, Davis played at Seabrook in an "awesome house concert" to finish his tour. He played before 50 to 60 people in a living room.

"It was laid back. We could talk to everyone. It was a really cool experience," he said.

Born on the Gulf of Mexico, Hunter Tynan Davis literally spent his formative years gaining his "balance" on the bow of his grandfathers shrimp boat, according to his website.

"Every day was in pursuit of the rising sun and race to catch it before it sank into the ocean. Aside from the unique geographical environment he happened to be fostered in, a rich and intense home life allowed his song writing abilities to blossom. Hunter's mother Tammy was a free spirited fashionista and his Father Shaun, a political wordsmith; who parlayed his own unparalleled song writing abilities into a satisfying political career," it read.

At the age of eleven Hunter began (as many songwriters do) playing on his fathers old spanish guitar and playing music. As the years progressed, Hunter's playing and songwriting abilities grew along with his love of sports.

After a brief stint playing Division I college football, the path of life was made clear...music.

"At PN-G I was committed to being a baseball pitcher and growing into it," Davis said. "I made Varsity in football my sophomore year. I became faster and I was still growing. There's nothing in the country like playing football at PN-G. During my senior year I was scouted to play Division I."

Prior to PN-G he attended schools in the Little Cypress-Mauriceville CISD from third-grade to ninth-grade.

He was offered a full-ride scholarship to McNeese State University. Hurricane Rita shortened his senior year in high school though he still registered nine or 10 sacks and was named to the Super Gold Team.

He tore his ACL while at MSU. While going through rehabilitation to make a comeback Hunter started playing gigs around Lake Charles.

"That's where my heart was (playing music). The Division I level has to be your life and I wanted to pursue music," Davis said. "You need dedication at that level. I moved to Nashville and that was the best decision of my life."

Davis enrolled in music at Lamar State College-Port Arthur and became a full-time student and traveling songwriter. Throughout this time period he traveled the country and opened up for acts such as Aretha Franklin and Johnny Preston. After graduation Hunter made his move to Nashville, Tennessee.

As a musician, Davis said he and his best friend and bass player, Daniel Hyberger, is focused on being humble and as genuine as he can be.

"We want to be genuine to the music and be us and have fun. We respect the people, ourselves and the music," Davis said.

He calls his brand of music Americana/Rock and performs ballads, rock and roll, blues, etc. "An accumulation of life."

Some of his influences range from Jackson Browne and John Lennon, to Stevie Ray Vaughn.

"It's (his music) is heavy guitar-driven. We have a plethora of songs in our arsenal and we're well rounded," he said.

Nashville music critic Beth McAllister wrote following a recent show: “With a sound so intense and ready to cater to the masses of people ready for new music, it seems like Hunter Tynan Davis is already gearing up for the big stage limelight. Energy and drive like his will not be wasted; perhaps we’ll see him take to selling out arenas sooner rather than later.”

After attending Tennessee State University for music business Davis toured much of the country across the U.S. In 2014, Davis recorded and released his first album “You Are Here” with Grammy Award winning producers and songwriters Gordon Kennedy and Ben Cooper.

Ben Cooper recently penned a number of the songs for Ricky Skagg's 2013 album “Mosaic” and Gordon Kennedy is an iconic Nashville producer, guitarist, and Grammy Award winning songwriter who wrote Eric Clapton’s Song of the Year, “Change The World”. Gordon also produced albums for Peter Frampton and Faith Hill. Davis and Hyberger met while attending Tennessee State University School of Music. Hyberger will spend in his home state of Kentucky and the band will return in October with a show at The Woodlands and then be in the studio for six months.

"All the venues have been great to us. We've had a good rapport and they ask us to come back," Davis said. "The next time we're in Texas we'll try to play in Beaumont. It's a gumbo pot of culture. We're really excited."