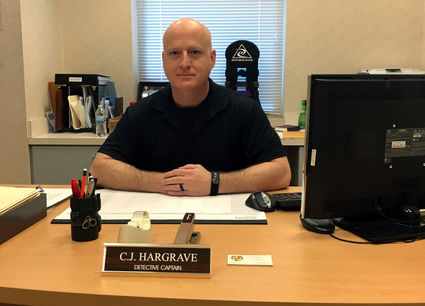 After 31 years in law enforcement, Cliff Hargrave is leaving the Orange Police Department to follow his dreams.

As a teen, Hargrave's first job was as a disc jockey at a local skating rink. A short time later, the 1984 Bridge City High School graduate started on the path to his career by becoming a reserve at the Bridge City Police Department. His brother, Joey, was already at the Bridge City Police Department and the pair would share a bond like no other and attended the police academy together. They graduated from the police academy in March 1985.

"It was then and still is today the highlight of my career, having my little brother follow me into law enforcement," Joey Hargrave said. "I am very proud of him and all he has accomplished. I wish him the best in his new endeavors."

Cliff Hargrave turned 19 years old around that time and was hired by the Orange County Sheriff's Office in April.

At OPD he started in patrol in 1991 and in 1998 he was promoted to captain. Hargrave switched departments and became the captain over the detective division where he has remained.

Over the years, there have been many cases of all types which have come across his desk. There is not any one case that stands out in his mind since he has always given it his all each time with no case being more important than any other.

However, there was a time when Hargrave considered leaving law enforcement. The incident shook him to the core and he questioned his choices.

In early 1986, while James W. Wade was the current sheriff of Orange County, gave law enforcement a bad name. Wade became interested in becoming partners with two men to manufacture and sell methamphetamine. Wade used his influence to release one of the men from the county jail and a short time later the drug operation began. Following an investigation and a lengthy jury trial, Wade was found guilty on nine drug related offenses.The district court sentenced Wade to 240 months in prison and five years of supervised release, according to information received from the U.S. Federal Courts.

Fortunately, he chose to remain in law enforcement and serve the citizens of Orange.

Hargrave has mixed emotions about leaving his job at OPD. On one hand he is sad to go, however, he is eager to move forward with fulfilling his dreams. He has opened a new business named Team Cliff Jiu Jitsu located at 1409 Green. He will offer mixed martial arts training and Gracie Jiu Jitsu to ages five years old and up.

"I am excited about the future," Hargrave said. "I have always wanted to do this while I was still young enough."

Hargrave has been involved in martial arts since he was 13 years old. Over the years he has acquired several black belts, but his most coveted black belt was received in 2011 under the guidance of Royce Gracie.

Royce Gracie is a Brazilian professional mixed martial arts and is a UFC hall of famer, and a Brazilian practitioner. He is considered by UFC fans to be the most influential figure in the history of modern MMA. Gracie gained fame for his success in the Ultimate Fighting Championship. Gracie popularized Brazilian Jiu Jitsu and revolutionized mixed martial arts with his results contributing to the movement towards grappling and cross-training in the sport. He holds the most consecutive submission victories in UFC history with 11, which he earned between UFC 1 and UFC 4.

Hargrave has not only achieved the highest ranking in jiu jitsu with a black belt, but is a certified expert in the use of force.

"It's sad to see him leave," said Lane Martin, OPD police chief. " I have worked with him for 25 years. He's been an excellent employee and friend."

Martin added, Hargrave has always set a great example for people he worked with and he has worked on each case with professionalism.

"He has trained a lot of people and enforced his knowledge," Martin said. "Although he is leaving, his expertise will live on in the department for many years to come."

A retirement party will be held at 2 p.m. January 28th at OPD in the Danny Gray room.

Replacing Hargrave will be Robert Enmon who is currently a captain in the patrol division. To get ready to fill the position, Enmon has been doing on the job training.

When not working, Cliff Hargrave will have more time to spend with his wife, Sally, of 27 years, his two daughters and his grandson which brings joy to his life.