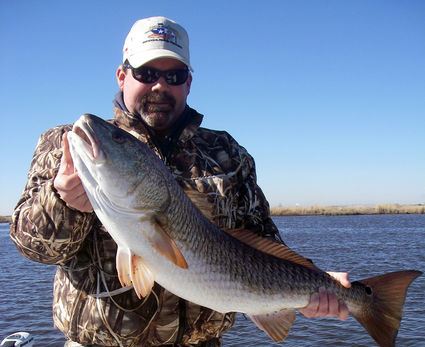 Dickie Colburn - For The Record

Seldom if ever do I make the short walk from the front doors of the H.E.B. on 16th street to my truck without running into someone that wants to talk about the local fishing. I don’t know if that’s because more fishermen shop H.E.B. or simply because my grocery shopping consists of picking up only two or three items nearly every day.

Either way, it is amazing how much you can learn about fishing while negotiating parked cars with a shopping buggy. Over the years, much of what I learned in those brief conversations was in some way connected with fishing the river rather than Sabine Lake, Rayburn or Toledo Bend, but that information has served me well.

Easily the two biggest game changing tips for me involved bouncing one-eighth ounce jigs off the bottom in 18 to 25 feet of water for specks and how to more consistently catch stripers across the colder months of the year. The once improving striper bite has all but vanished following Hurricane Ike’s arrival, but the deep water trout bite only gave way to larger lures and slightly different techniques.

Over the past year, both of those bites have literally been washed out due to seemingly non-stop flooding above the impoundments. Poor water clarity is a confidence killer for most fishermen, but dirty water in itself only limits the hunting range for the fish. The show stopper is that all of this dirty water is also fresh water and both the trout and flounder need a percentage of salinity to survive.

That is not a problem, however, for stripers or redfish, so while the stripers have become the ghosts of the river, local anglers continue to catch at least a few reds on the more manageable weather days. And, while many of them prefer to catch them by dissecting shoreline cover with crankbaits and spinnerbaits, because of the reduced water clarity, scented lures like GULP or plastics tipped with a piece of shrimp have been the better option.

All of which leads up to my most recent grocery stop and yet another tip earlier this week. I still had my boat in tow and after Mr. Cleon Bias completed a slow and thorough inspection, he felt compelled to share why he doesn’t care to fish this time of the year. “I don’t fish when I can’t see my shrimp just beneath the surface and I don’t fish when my frozen shrimp is still frozen after fishing all morning!”

While I agreed with his reasoning, parking the boat due to less than optimum conditions is not yet an option for me. I, too, detest fishing on the coldest of days, but fishing for hire mandates scouting in miserable weather or knowingly yielding any credibility for an unmerited payday.

Having now shared a hot spot for gaining useful fishing information, I have little else to report that will help you catch fish this week. I was forced to look for trout two days in a row and I may as well have been looking for carrier pigeons. We still caught redfish in both the bayous and the lake, but caught only enough trout to confirm the fact that they were still around.

The ship channel south of the Causeway may once again be your best bet, but I have talked with no one that has given that water a shot. Likewise, the Causeway reefs may be a viable option and one that I hope to check out wind and tide changes permitting. I would not be at all surprised to find the trout riding out the low salinity levels by hanging out over the deep shell.

In the meantime, don’t forget about the Rat-L-Trap tournament set for January 24th on Sam Rayburn. You can still register online or by calling 318-487-0352. The Triangle Tailchasers will also host the first of two open trout tournaments the following weekend out of Ancelet’s Marina.For more information you can go to their website. There will be no captain’s meeting with registration set for Daley’s Hunt N Fish on the 29th.