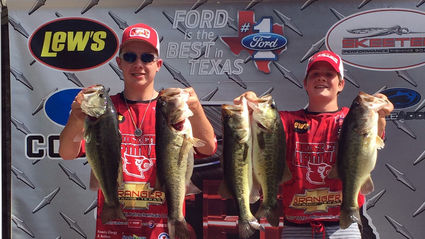 Pictured is the freshman, rookie team of Kaden Duncan and Randy Abate, who earned a third place finish in the weekend tournament on Lake Sam Rayburn.

Bridge City had a great weekend on Rayburn in round four of the SETX High School Fishing Tournament series. The rain held out but the wind made fishing tough. The freshman team of Kaden Duncan and Randy Abate earned a third place finish bringing in five fish weighing 21.77 pounds.

Other notable Bridge City finishes were:

The teams participated against 432 other high school teams from around the state.