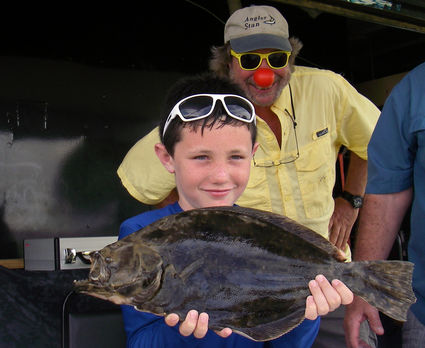 The monsoon that roared across the area last Thursday was apparently not severe enough to temporarily waterlog what has been a steadily improving bite in Sabine lake.The S.A.L.T. Club was blessed with a weekend of favorable fishing conditions for their two day tournament and the winners posted very impressive numbers in every division.

As expected, when you fish 198 entries not everyone is going to catch fish and even the winners said that the results were not indicative of the catching. The game plan is not the same, however, when you are looking for one big fish rather than numbers.

While there were some quality fish paraded across the weigh-in stage, no one was any prouder of his entry (well……maybe his family) than L.J.Riggs who won the flounder category of the Kid’s Division with an adult sized 2.47 pound fish.He was willing to share the details of his catch, but was quick to point out when asked if he liked to fish, “I like catching a whole lot better!”

If your last name was Fesco, you found the trout bite to be very much to your liking on Sunday.Mike won the division with a beautiful thick bodied trout that weighed an impressive 8.09 pounds.Brent wasn’t far off the pace with a 7.51 pound trout and Hunter finished fourth with a 6.58 pound trout.Jason Ellender prevented a family sweep when he squeezed into third with a very nice 7.01 pound fish.

In the redfish category, no angler had a better day than Albert Bates as he posted two reds over the nine pound mark.In spite of his consistency, he was still forced to settle for second and third place checks when Eddie Roberts edged his pair of reds out with a 9.74 pound fish.

No winning angler was forced to sweat a fish out any longer than Perry Morris and it truly wasn’t over until the last second ticked off the clock.After weighing in his 3.81 pound flounder with less than an hour left until the scales officially closed, Morris had to suffer through some near misses.With only ten minutes left, however, Gene Inman provided the ultimate scare with a flounder that fell short of the winning mark by less than a tenth of an ounce.

Morris earned an additional check with his fish by winning the largest caught and released flounder.Saturday leaders, Mark Foreman and Steve Sage finished 2^nd and 3^rd as both released 3-pound plus flounder as well.

There were some weights still pending at the time of this writing, but the 42^nd annual event was once again a huge success. There is no other local organization that affords you the opportunity to learn more about area saltwater fishing than the S.A.L.T. Club.You can also pick up tips on everything from making gumbo to mending a castnet at monthly meetings that include guest speakers and something good to eat.

Aside from the fact that no one else does more to guarantee a positive future for saltwater fishing, one of the highlights of joining the CCA is fishing their summer-long S.T.A.R. tournament which kicked off this weekend.If you will fish only three or four times all summer there is no sense in not signing up yourself and the kids.

You have only to ask the countless anglers that have missed out on the truck, boat and trailer rig after catching a tagged red or the parents of a youngster that just released a fish worth a $50,000 college scholarship simply because they failed to sign up.Regardless of your skill level, a winning fish might bite your hook on any trip.

Sign up today, support the CCA and look forward to the next bite!