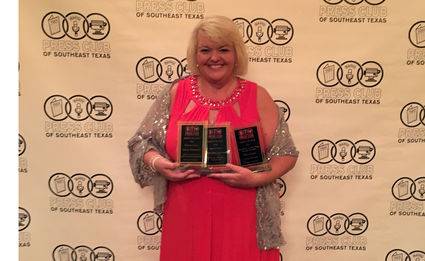 Staff Report - For The Record

The Record Newspapers staff shined brilliantly this past Friday following an annual awards banquet featuring media outlets from across the region.

The Press Club of Southeast Texas held its 25th Annual Excellence in Media Awards on Friday, June 10, at the MCM Elegante Hotel in Beaumont to recognize the best in radio, television and print journalism in 2015. Staff from The Record Newspapers secured a total of eight awards, including three first-place awards, in the non-daily newspaper division.

Columnist Caroline Brewton won three awards for her with The Record Newspapers in 2015. Brewton received second place in "Guest Column" category for her article, "Self Starvation and the bikini bridge hoax," a second place in the "General Column" category for the column, "Outgrowing growing pains," and an honorable mention in "General Column" for her article, "On choosing a private Christian school: an outsiders perspective."

Guest sportswriter Meri Elen Jacobs won a first-place award in the "Sports News" category for her story, "Mustangs claim state championship," which was about the West Orange-Stark Mustangs first state title in football since 1987.

A full list of categories and awards can be found online at pressclubofsoutheasttexas.org