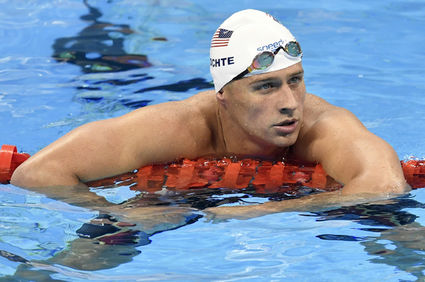 FILE - In this Aug. 9, 2016, file photo, United States' Ryan Lochte checks his time after a men' 4x200-meter freestyle relay heat during the swimming competitions at the 2016 Summer Olympics in Rio de Janeiro, Brazil. A Brazilian police official told The Associated Press that Lochte fabricated a story about being robbed at gunpoint in Rio de Janeiro. (AP Photo/Martin Meissner, File)

The Olympic Games are over for another four years with the United States doing what it does best—win the most gold, silver ad bronze medals—racking up a total of 121 medals during the two weeks of competition of nearly every athletic event in the books.

However, the pride of being better than every other country in the world was tarnished somewhat by the stupid antics of four members of the U.S. Swim Team, who last week partied too heartily and allegedly vandalized a service station restroom on their way back to the Olympic living quarters during the wee hours of the night.

When the Fearsome Foursome was questioned by security after viewing the television monitor of the incident, Ryan Lochte concocted a story about being robbed at gunpoint with the three other swimmers.

But the TV monitor told another story of the swimmers starting an altercation that caused damage in the restroom. The story spread quickly about the alleged robbery causing panic among the Rio visitors and an international incident, according to an article that appeared in Friday’s edition of The Houston Chronicle.

“Lochte, 32, is a four-time Olympian. What motivated him to make up such a story is beyond imagination,” the article pointed out. “The story started with his mother telling reporters that Lochte had told her he had been robbed.”

The story sounded fishy from the start when Lochte said he refused to get down on the ground when he had a gun pulled on him. Even James Bond would have complied to that command. And the “robbers” didn’t take anyone’s cell phone. Most robbery victims in Brazil find their phone is the primary target.

Somehow Lochte, who the San Antonio Express-News described as a gifted athlete hiding in the body of a flake, left the country shortly after making the accusation.

The other three wanted to leave some cash to pay for the vandalism and vanish from the scene unscathed. They wanted to get back to their living quarters because they didn’t want anyone to know what happened and they were with two women that weren’t girlfriends of any of them.

When the three swimmers returned to the Olympic Village, they appeared to still be in possession of their wallets and watches that they had reported stolen.

There’s no telling what Jack Conger, 21, Gunnar Bentz, 20 or James Feigen, 26 said to the authorities. Conger swims at the University of Texas and Feigen is a former Longhorn.

“The robbery fable deeply hurt the Brazilians, who were eager to prove they could get street crime under control and host a safe Olympics,” the Chronicle added. “And it overshadowed the efforts of the U.S. Olympians who have dominated the medal count. Swimmers alone piled up 16 golds and 33 total medals at the games.

The article also questions the future of Lochte who wants to return to compete in the 2020 Olympics. He really is a strange quacker who loves the limelight and dyed his hair white for Rio, not realizing the pool’s chlorine would turn his hair color a putrid green.

Lochte still is facing the possibility of legal charges in Brazil and sanctions from USA Swimming and the International Olympic Committee.

Despite the embarrassment by the U.S. Swim Team and the barely finished, rough-around-the-edges structures and functions, the 2016 Rio Olympics have to been evaluated as a success, even though almost everyone agrees that awarding the Olympics to Rio probably wasn’t a great idea.

And Ryan Lochte’s legacy read: “The most embarrassing Olympic athlete in history!!!”

KWICKIES…After getting romped on 13-5 by the Orioles Thursday at Baltimore, the Houston Astros put on their hitting shoes and swept the next three games to the dismay of the sellout crowds at Camden Yards, scoring 37 runs and banging out 48 hits in the four-game series. The Astros are playing a three-game set at Pittsburgh, are off tomorrow (Thurs.) and return to Houston to play a weekend series against Tampa Bay and three with the Oakland A’s.

It shouldn’t be a secret that the Alabama Crimson Tide begins the 2016 college football season by being the No. 1 team in the Associated Press preseason poll. Clemson comes in a close second, followed by Oklahoma, Florida State, LSU, Ohio State, Michigan, Stanford, Tennessee and No. 10 Notre Dame. Texas teams include TCU (13), Houston (15) and Baylor (23). Other teams receiving votes include Texas A&M and Texas. The SEC leads the 25-team preseason poll with six members, followed by Pac-12 (5), Big Ten (4), ACC (4), Big 12 (4), AAC (1) and Independent (1).

Si Woo Kim, a 21-year-old South Korean golfer, won the PGA Tour-Wyndham Championship by four strokes last weekend at Greensboro, N.C. firing a 21-under par 259 and increasing his bankbook by $1.008 million. Kim shot rounds of 68-60-64-67—259 to win by four strokes over Luke Donald.

JUST BETWEEN US…Last week this Korner commented about the quarterbacks of the Houston Texans, Dallas Cowboys and Seattle Seahawks.

This week Osweiler improved immensely while Savage only put a field goal on the scoreboard in Houston’s 16-9 win over the punchless New Orleans Saints.

Rookie Dak Prescott once again looked ahead of his years by leading the Cowboys to a 41-14 shellacking of the Miami Dolphins.

But a funny thing happened to the Seahawks’ back-up Trevone Boykin, who threw a touchdown pass and a two-point conversion as time expired to beat Kansas City last week.

Ironically, after bringing Seattle back from an 11-0 halftime deficit, Boykin threw an interception in the final minute that was run back for a touchdown by Minnesota with the score tied at 11-11, giving the Vikings an 18-11 win.