By Dave Roger - For the Record 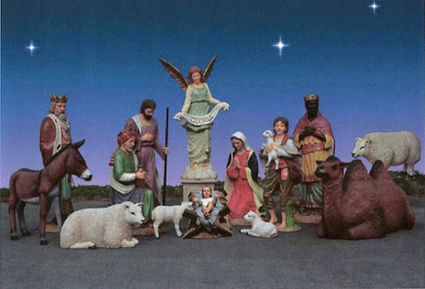 A devout Southern Baptist and a group of local atheists are united in being upset about the city of Orange’s $20,000 purchase of Christmas decorations that includes a life-size Nativity scene.

The 14-piece, $7,999 Nativity scene, including a 7-foot-tall angel to watch over Jesus, Joseph, Mary and the three wise men, is one of nine holiday icons city council voted to purchase last week.

The fiberglass likenesses are to be placed on the lawn of city hall, replacing a much smaller Nativity scene that was at the center of controversy last year.

In 2015, when the Orange County Atheists group asked to hang a “Happy Holidays” banner at city hall, the city opted to relocate the Nativity scene to a nearby private park.

The additional non-Christian decorations that include Santa Claus, a sleigh and three reindeer, a 10-foot-tall toy soldier and a 9-foot Jewish menorah were chosen because the mix puts the display in compliance with federal regulations, Mayor Jimmy Sims said.

Wayne Guidry, the only city council member to vote against the purchase, held up a Bible and told fellow council members there were far more important things to spend taxpayer money on.

“I’m a devout Southern Baptist,” said Guidry, who spent four years overseas as a missionary before starting a career in education. “When I read the Bible and ask ‘What would Jesus do?’ I think He’d go out and feed the needy.

“I think we as Christians often fight the wrong battles. I think this is a good example.”

The display of a Nativity scene on the city hall lawn has been a long-time end-of-year tradition in Orange and people were surprised by OCA’s request last December to display a banner that read: “Whether you are celebrating Saturnalia, Hanukkah, Kwanzaa, Christmas, the Winter Solstice, or any other holiday this time of year, the Orange County Atheists would like to wish you … Happy Holidays!”

Clara Gilley, OCA spokesperson, said her group of about five dozen members was surprised to hear about this year’s end run by the city.

“Our initial reaction was that of shock,” she said. “The religious part aside, it’s kind of ridiculous to spend that amount of money on lawn decorations.

“We’re checking to see if what the city did is legal.”

Sims said it is. He said last year’s request by OCA to fly its banner caused the city to take a second look at its traditional holiday display.

“Nobody sued us, nobody threatened to sue us,” he said. “We just look at the language of what the federal law said – that you need to be in compliance. We weren’t in compliance.

Gilley said her group’s sign request had been misunderstood.

“Last year, a lot of people got pretty upset,” she said. “They assumed we forced the city to remove the Nativity. We just asked the city to include us.”

The Orange County Courthouse, a few blocks from city hall, has an annual tradition of putting up a Christmas Nativity scene, too.

On Oct. 25, the same day city council voted 3-1 to approve its $20,626 purchase of decorations, county commissioners voted to spend $560 to replace a decades-old Nativity with a new one that’s 4-feet tall and plastic.

“Last year, we didn’t ask anything about the courthouse. We just asked to put our sign up at city hall,” Gilley said.

“They had a Christmas tree there donated by the paper mill, so we figured it’d be OK if we made a donation. That’s why we asked to put up our sign.”

In his report on the new city of Orange decorations to city manager Shawn Oubre and city council, Jim Wolf, public works director, included a diagram of where the new Nativity is to be placed on the lawn. 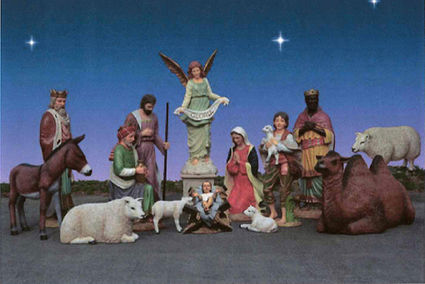 It’s a 10-foot by 20-foot area that includes the Nativity scene and a $629 manger on the northwest corner of the lawn, not far from where the previous Nativity scene sat.