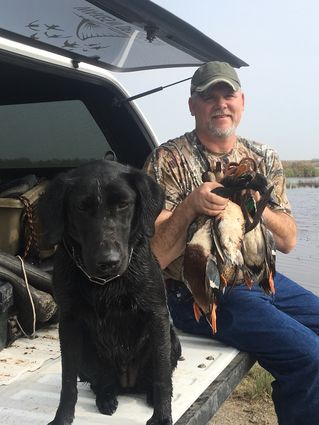 For The Record- Capt Chuck Uzzle

For all those hunters who have spent the last couple of months waking early,

fighting the weather, and staring at the skies in search of ducks it's almost

over. In what feels like the blink of an eye the Texas duck season that started

wishing for more. The light geese conservation season will allow hunters a

long 8 month wait until the next season kicks off. Local hunters who cross the

uneventful due to the warmer weather. At least according to the latest forecast

So far this season has really been a series of highs and lows for most hunters,

it was truly feast or famine. Out of the gate both Louisiana and Texas started

off about as hot as you could ever hope for. Huge numbers of teal and gadwall

covered up spreads from the saltwater marshes to inland rice fields. All the

rains at the perfect times had many areas lush, green, and full of the best food

available. I made several trips to scout some rice fields early in the season

and was just absoultely blown away at the amount of ducks that were here early,

it was amazing. As it usually happens the shooting during the first week or so

was incredible and so was the hunting pressure. It didn't take long for the

The next several weeks for both Texas and Louisiana were consistent and solid,

anxious to crank the second split up. Then like a bad dream everything slowed

down, a season on fire suddenly got as cold as ice. A warming trend farther up

turn put even more pressure on birds already in the area. It didn't take long

you look at it.

birds began to fill the marshes and the hunting drastically improved. Local

in the arm to many hunters who had all but written off the season. Another big

about everything. The flooded prairies now offered ducks new areas to rest and

because they were spread out seemingly everywhere. A few hunters took advantage

mallards and wood ducks. Others concentrated on scouting more and locked down a

hunts. As always the persistent hunters who were willing to go the extra mile

continued to have success while others lamented the bad conditions.

hunters. The early season success had many, including myself, believing that

multitude of factors lead by weather. For me personally the year was well below average, the ducks

were here today and gone tomorrow. It was truly frustrating for the most part. I did manage some really good hunts out of state

and that's what saved my sanity. Thank goodness for those few hunts.

you have to stare at the calendar and start counting the days all over again.

expectations that every waterfowler always has.