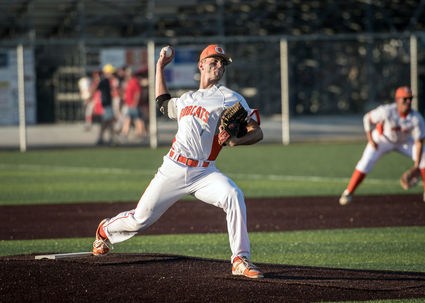 Dave Rogers - For The Record

Friday will be do-or-die time for the West Orange-Stark and Orangefield baseball teams.

That’s when they square off at Lamar’s Vincent-Beck Stadium in a one-game Class 4A regional quarterfinals playoff.

Both teams had been playing – and winning – best-of-three playoff series.

WOS has swept Diboll and Tarkington. Orangefield needed three games to knock off Hudson before a sweep of Hardin-Jefferson last weekend.

“I think that gives us our best chance,” Orangefield Bobcats coach Tim Erickson said. “We’ve faced their No. 2 and No. 3 already this year and weren’t able to do a whole lot with them.

“I think this gives them our best chance to be successful.”

The time-honored logic is that when one team is a longshot to win, it has a better chance of getting an upset when it only needs one win.

And the Bobcats, who finished 4-6 and fourth in District 22-4A while WOS finished 10-0 and first, is definitely an underdog.

Landry’s Mustangs won 12-2 and 7-3 in their regular-season matchups against the Bobcats.

“I haven’t seen him [Jack Dallas] throw this year. I faced him the last three years,” Erickson said. “He’s got good velocity and good command of his off-speed. He’s got a real sharp curveball.

“He reminds me a lot of Stubblefield, who we’re going to throw out there. That’s one of the best pitching matchups in the area. It should be a good game to watch.”

“He’s like Ryon,” Erickson said. “He gets up there and competes every inning. It’ll be a battle.”

The Mustangs average 8.8 runs per game. Jack Dallas leads with 29 RBIs, followed by Ryan Ragsdale with 27 and Chad Dallas with 22.

“They’re good on the bases,” Erickson said. “They’re so fast. With the exception of one or two guys in their lineup, they’re all a threat to steal bases.

“That’s something you’ve got to prepare for all week, holding runners.”

Against Hardin-Jeff, Stubblefield pitched seven innings of five-hit ball, striking out six while allowing one earned run, in the final inning.

The Bobcats won the series opener 4-1 on a pair of runs in the second inning and another in the fourth. Stubblefield went 2 for 4, Johnny Armstrong knocked in a pair of runs with a sacrifice bunt and Kent Michael and Anthony Holland each plated a run.

In the 5-1 closing win, Mason Gonzales pitched a six-hitter over seven innings, striking out seven and allowing one earned run. Dylan Anthony, Mack Patterson, Brett Fregia, Armstrong and Stubblefield each knocked in a run.

WOS beat Tarkington 13-0 and 7-4. The Mustangs had to rally from a 3-1 deficit in Saturday’s finale, but with the game tied at 4-4 in the bottom of the fifth, Jack Dallas sparked a three-run rally with a double.

Cardinals meet Silsbee in 22-4A rematch

Bridge City and Silsbee square off in the Region III quarterfinals of the Class 4A state baseball tournament.

The best-of-three series will be played Thursday and Saturday at Lamar University’s Vincent-Beck Stadium in Beaumont.

Silsbee finished second in district at 8-2, falling only to West Orange-Stark. Bridge City finished 5-5, dropping two games each to WOS and Silsbee and one to Hamshire-Fannett.

The Cardinals actually trailed 1-0 when they came up to bat for the first time in this series but Justyn Romero’s grand slam in the first fixed that.

Schuyler Thibodaux had four hits and Gavin Green and Kevin Grodon two each, with Thibodaux plating a couple. Gordon was the winning pitcher.

In the series finale, BC scored four in the second and five in the fifth, with Romero pitching five innings of four-hit ball. Logan Hamm was 3 for 4 with three RBIs, Thibodaux knocked in two with a 2-for-5 at the plate and Gordon was also 2 for 5.

Both the Bridge City and Little Cypress-Mauriceville softball squads have advanced to the fourth round of the Class 4A playoffs and could play each other for a trip to state next week if both survive this week’s tests.

Bridge City swept Hardin-Jefferson 8-2, 4-1 last week while LCM bounced back from an opening 9-4 loss to Huntington with a Saturday sweep of the Red Devilettes, 7-0 and 5-0.

Both playoff series will be neutral site series north of Houston.

LCM takes on Liberty Hill at Madisonville High School beginning at 7 p.m. Thursday. Game 2 (and a double-header if necessary) begins at 5 p.m. Friday.

Bridge City faces Lorena at Sam Houston State in Huntsville. The best-of-three series begins at 7 p.m. Friday. It concludes Saturday with Game 2 (and a double-header if necessary) beginning at 2 p.m.

Sophomore Brianna Frenzel collected two hits and knocked in two runs in the series finale as LCM advanced to the next round with a 5-0 win. Ashley Short and Madison Murdock also had two hits each.

Renna Toomey pitched the shutout, allowing just three hits while striking out two and walking none.