Photo: Bill Shaddock, center, joins members of his team at Orange’s Capital Title. An Orange native, Shaddock acquired Sabine Title May 15 and is owner and CEO of a company with 75 locations across the state.

Orange didn’t so much as lose a well-known company name as it gained a big civic booster.

Orange native Bill Shaddock, the owner and CEO of Capital Title, which acquired Sabine Title on May 15, said he owes a lot to his upbringing in Orange and he wants to give back.

“I grew up in Orange,” the younger Shaddock said. “My dad was a doctor there for 35 years. I lived in the community, loved the community. I left to learn what I needed to learn and build what I chose to build but I now chose to bring it all back to my original hometown.”

Now in his mid 60s, Shaddock oversees a company that is the largest independently owned title company in the state of Texas, with more than 75 offices statewide.

And it’s just one of several of the family businesses.

Oldest brother Carroll is an attorney in Houston, while Bill and middle brother Peter, a Dallas homebuilder, are partners in a real estate development system. Bill’s children, William, Andrew and Caroline, are all working “in various stages of our business, in our office with me.”

Bill Shaddock met his wife, Kim, at Baylor, where he was studying for a law degree. Previously, he earned his bachelors in finance at TCU and a MBA at SMU.

“I was an attorney and a real estate attorney. Then I became a fee attorney, associated with the title business,” Shaddock recalled. “I started very, very small, just by myself.”

Over the next 15 years, Shaddock grew and expanded his operation into the largest fee office network in the state with 25 offices in the Dallas-Fort Worth and Houston areas.

In 2006, Shaddock purchased Capital Title of Texas and merged his network into the new company.

Shaddock said his business did about $7,500 in revenues his first year. “This year, that business will do $100 million.”

And he credits his Orange upbringing.

“Look at our website: The 10 values and ideals that serve as the cornerstone of our company are things I learned growing up in Orange,” he said. “That’s what I’d credit Orange with.

“In my home, the church and the community. Those were strong values, the cornerstone of our entire company. It’s building personal relationships.”

In his dealings with Sabine Title employees, all of whom will remain in place, Shaddock said, he has already created relationships.

“It’s been a great change,” says Amy Yadon, escrow officer at the Orange Capital Title office. “Everyone is really excited in the community. The realtors, the lenders we deal with. It’s not like your big corporate company.

“Mr. Shaddock is probably the most personable man I’ve ever met. He’s so good to all of us.”

The company once owned by the late Lynwood Sanders – he did title work for the Toledo Bend Reservoir -- will continue to be run by Roger Conway, Shaddock said.

“We have retained all existing employees and hope to grow employment all the time,” Shaddock said.

Shaddock has been busy in his hometown for a while.

He looked into buying the Orange train depot a few years ago, about the same time as did Carrie Woliver, a Stark High classmate of his brother Peter.

“I stopped down there on one of my visits. It was unkempt and the weeds had grown around it. I told people to leave me a lawnmower and I’d cut the grass up there,” Bill Shaddock said.

Woliver and her husband bought the depot and helped create the Friends of the Orange Depot, to which they donated the building that has recently been restored.

“We were thrilled to hear that Bill’s company purchased Sabine Title,” Woliver said. “He’s quite an entrepreneur.

“Bill wanted to save the depot about the same time I did. Jay Trahan [Orange Director of Economic Development] put us together. He has served on the Friends of Orange Depot board since its inception in 2013.

“He supports us financially. For the last two years, he has been one of the larger sponsors of our gala.”

Shaddock said he has a keen interest in the work going on to bring a new hospital to Orange.

“Baptist Hospital leaving, that upsets me. My dad was part of the group that got that hospital going. He helped build the hospital,” Shaddock said. “I don’t like the fact that the hospital is not going. That is not OK with me. I’m going to try to do something about it.

“I’m an optimistic and positive attitude type person. We need to figure out what needs to be done and we need to get busy doing it.” 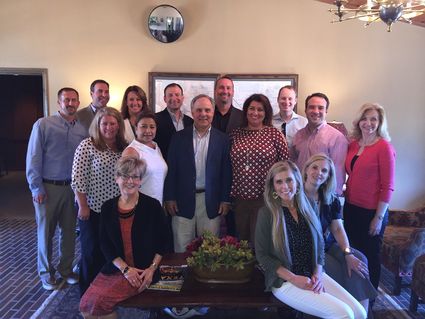 Shaddock says he loves the city where he grew up sacking groceries for Kroger’s on 16th Street and delivering clothes for Smith’s Reliable Cleaners.”

“We do have a state-wide organization but I do want to come back more than I have previously,” he said. “I decided if I came to Orange, it would make me much more attuned to the needs and able to help it.

“What’s the old saying? Here I am Lord. Send me in coach. I’m there for good. What can we do to build Orange and Orange County into the best county in the United States?”