Did you know that the assistant principal at Bridge City High School, Mike Blakeney, sings? Since he currently doesn’t perform, that might be one of those “secrets” tucked away in a closet somewhere. If you haven’t heard him sing before, you will get the chance, August 19 at the Jefferson Theater in Beaumont, when he will take the stage once again.

He performed several times on the Charlie Pruitt Country Music Show between 2001 and 2006. In June, he auditioned for the upcoming reunion show and made the veterans cut.

“Charlie Pruitt gave his time, his encouragement, and sometimes even his money, selflessly, to give young entertainers and opportunity to perform. And, while doing so, he also gave Southeast Texans some first-class country music entertainment,” said Blakeney. “I auditioned for the reunion show not for the chance to perform again, but as a gesture of thanks and respect for all Charlie has done for so many people in our area.”

Blakeney’s favorite memory of the show was a trip he made to Charlie’s hometown in Arkansas and the shows at the “old” Jefferson Theater. Currently an educator at BCISD, “I still love music and living in Southeast Texas,” he said.

Joining the selected newbies to the show will be Bridge City Middle School 7th grader, Daelyn Perry. Since the last Charlie Pruitt Show was held in 2007, Daelyn is too young to remember the show. She has been performing in area festivals and was a finalist at Frog Fest. She also frequently sings the National Anthem at school functions.

“I found my love for music and singing from my dad Russell,” she said when she filled out the registration form for the audition. “He and I will play piano and guitar together and sing as often as possible.”

The 12-year-old has attended several semesters at Tonalta School of Music and plays at local festivals as often as possible. “Every opportunity is one step closer to my big dream,” she said.

Both Daelyn and Blakeney will be joining other Orange Countians and area performers in the celebration of 25 years of The Charlie Pruitt Country Music Show.

“Charlie Pruitt gave his time, his encouragement, and sometimes even his money, selflessly, to give young entertainers and opportunity to perform. And, while doing so, he also gave Southeast Texans some first-class country music entertainment,” said Blakeney. “I auditioned for the reunion show not for the chance to perform again, but as a gesture of thanks and respect for all Charlie has done for so many people in our area.”

The show ran from 1982-2007, starting at the Jefferson Theater, but began traveling when the theater underwent renovation in 2000. Other venues hosting the show were the Holiday Inn and Julie Rogers Theater in Beaumont; and the Lutcher Theater in Orange.

It returns to the historic Jefferson Theater for a reunion show Saturday, August 19 at 8 p.m. Proceeds from the show will benefit the Humane Society of Southeast Texas for their building fund.

Pruitt began the show to give aspiring, but often unknown, country singers a safe, family friendly platform to perform and hone their skills. In the spirit of the original mission of the show, there will be three performers new to show added to seven alumni. Performers came from all over Southeast Texas and beyond to audition for the reunion show back in June at Benoit’s Louis Hall in Vidor.

The talent presented that night made the judges’ decisions tough to pare it down to 10 performers. Other newcomers to the show are Rex Harris of Beaumont and Kay Miller of Lumberton. Also Jeremy Williams joins veteran Ashley Riley in a duet called Jackson Town. Other veterans returning to the show are Regina Richards, Ashley Bradley, Paige Price, Lana Anderson and Frank Davis.

Also new to the show will be a quartet, the Sabine River Bend Bluegrass Band, playing 20 minutes “in front of the curtain” before the show starts.

Charlie Pruitt and his wife Elizabeth, who now live in the Dallas area, will be in attendance as special guests.

The reunion show was an idea originating from some of the band members that were a long time part of the show. Area musician, Doug Childress, was part of the planning of the very first show in 1982 and was the leader of the original stage band for the show, the Blackwater Band. Childress not only heads up the reunion committee, he will serve as emcee for the show.

Britt Godwin, area singer, songwriter, was in charge of assembling the band for the reunion show from the many musicians that played through the years. Godwin got his start on the show at the age of 14. He spent many years on the road performing, but has spent the last several years playing locally and is a frequent participant in area fundraisers. 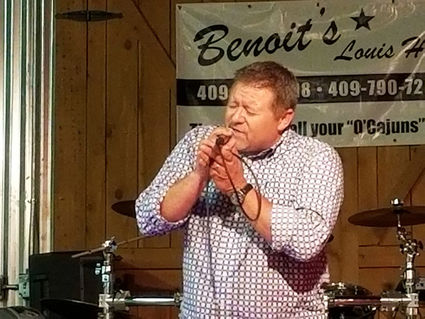 People can also support the Humane Society by bringing pet food to the show. There will be a truck on hand to accept donations of Purina Dog Chow, Cat Chow, Puppy Chow and Kitten Chow. They will accept other brands, but those will be added to the nonprofit’s food bank.

This is a family friendly event suitable for country music fans of all ages. For more information, check out the Charlie Pruitt Country Music Show Reunion Facebook page.