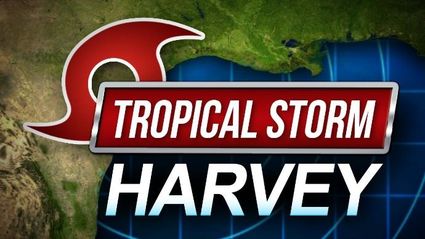 The Sabine River level topped its expected crest of 30.7 feet at Deweyville Friday morning, forcing the National Weather Service to adjust its forecast.

It now says the major flooding caused by Tropical Storm Harvey will peak at 31.4 feet at the river’s intersection with Highway 12 late Saturday or early Sunday.

Good news comes from upriver, where the reservoir level at Toledo Bend is going down after having remained at a consistent level for nearly 24 hours.

“We’re not going to have to let any more water out of Toledo Bend unless there’s more rain out there we can’t see,” David Montagne, Sabine River Authority general manager said Friday morning.

Residents of Deweyville and downriver in eastern Orange County are looking for some good news after Tropical Storm Harvey dropped record rainfall on the area Tuesday.

The Toledo Bend Reservoir, where the water level was as high as 173.81 feet above sea level Thursday afternoon, was at 173.58 at 9 a.m., according to the National Weather Service’s tracking of the U.S. Geological Survey gauges available online at water.weather.gov.

Montagne said Friday morning the federally regulated spillway will continue its releases at the same “Step 6” rate as Thursday, 81,520 cubic feet per second.

All 11 of the dam’s gates are open six feet.

A spillway release of over 200,000 cfs preceded the record-breaking March 2016 flooding of Deweyville and east Orange County.

That was required after rains in northeast Texas filled the reservoir to a record 174.36 feet. The Sabine River at Deweyville had a record crest of 33.3 feet after the 2016 release.