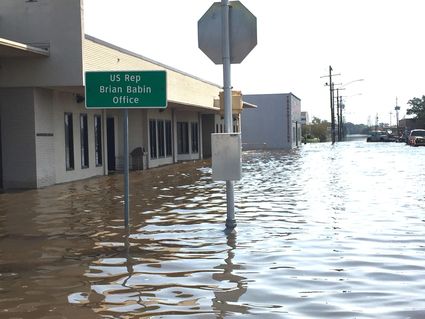 At noon Saturday, Sept. 2, the Sabine River had crested at Deweyville and Toledo Bend Reservoir had decreased its water releases into the river.

In Orange, the Sabine wasn’t expected to reach its crest of 7.7 feet until midday Sunday and then, according to National Weather Service forecasters, the water won’t start decreasing until Tuesday, Sept. 5.

The spillways at Toledo Bend dam north of Burkeville were releasing 49,490 cubic feet per second at noon Saturday.

The reservoir water level was at 173.10 feet above sea level.

The water level at Toledo Bend peaked at 173.81 Thursday, when it began releasing 81,520 cfs, which continued into Friday.

Both electrical generators were running, one releasing 9,960 cfs, the other 6,530 cfs.

The Sabine River at Deweyville was at 31.54 feet at 12:45 p.m. Saturday, after peaking at 31.6 feet Saturday morning. The NWS predicts the water will remain around 31 feet through midday Tuesday.

Flood stage at Deweyville is 24 feet. During 2016’s record-setting flood, the river set a record crest of 33.3 feet.

In Orange, flood stage is 4 feet.