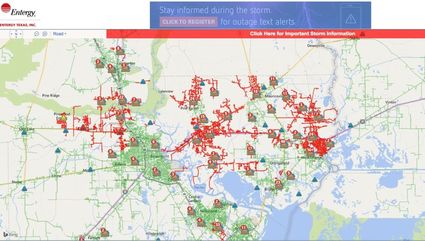 That’s half of the 52,000 outages reported by Entergy Texas in an area that includes counties east and northeast of Houston all the way north to Huntsville.

The power company says its workers are unable to work faster because waters continue to rise from the Neches and Sabine Rivers.

“Additional flooding has increased flood water depth from 6 feet to 8 feet of water in some places. Flooding not only prevents restoration, but floating debris is causing additional damage that must be repaired,”Entergy said in a Saturday afternoon news release.

A total of 167 Entergy workers were in the field Saturday in Orange, Vidor and surrounding areas with additional workers en route, the company said.

“The most significant damage is to the transmission lines that feed the substations. Three substations remain out, impacting downtown, Old Town, Lamar and Front Street, 16th Street, as well as Little Cypress, Bridge City, West Orange, Mauriceville, McLewis and Winfree,” the release sent along by Debi Derrick said.

“In the Vidor area, approximately 85 percent of customers remain without power after losing most of the transmission power lines serving the substations.

“Workers are located in all substations making repairs and preparing equipment to allow for restoration once the transmission lines are energized.

“However, additional rising water is expected today in Orange, which will impede progress. Large sections of customers will be restored as power returns to these substations.”