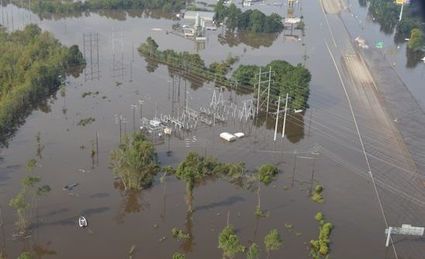 “Normal” may take a good while.

But the numbers are definitely trending in a positive direction for storm-punched Orange County.

And the reservoir level at Toledo Bend has dropped so that the required spillway release has been cut to Step 1, the first and most minimal, of 12 Steps.

However, that left 77662, the western side of the county that includes Rose City, Vidor and Pine Forest, with 7,400 outages.

Entergy says two substations are down in Orange County and the company’s timeline to have all outages repaired is Sept. 11-13.

Meanwhile, the reservoir level at Toledo Bend was at 172.6 feet at 10:45 p.m. Sunday, and five floodgates were open one foot each for a release of 5,000 cubic feet per second.

Downriver, the Sabine River was at 30.88 feet at Deweyville at 9:45 p.m. Sunday after cresting at 31.6 feet Saturday. The National Weather Service was calling for another crest at 31.3 feet Tuesday.

The flood level of the Sabine River is 24 feet at Deweyville, 4 feet at Orange.