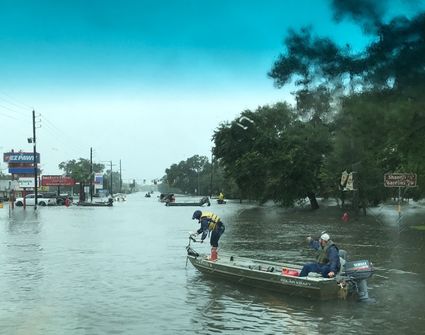 The National Weather Service in Lake Charles is still seeing major flooding on several rivers across our region, nearly a week after Orange City Councilman took this photo from his vehicle looking down 16th Street in Orange.

Major flooding is ongoing not only at the Sabine River in Orange, Deweyville and Bon Wier and Cow Bayou near Mauriceville, but also at Pine Island Bayou at Sour Lake/Bevil Oaks, Neches River at Salt Water Barrier and Beaumont, and the Calcasieu River at Oberlin and Old Town Bay.

All of these locations have already crested but most of them will stay in major flood category status through at least Thursday this week.

Early Tuesday, Sept. 5, the Sabine River was at 30.35 feet at Deweyville, still six feet over flood stage of 24 feet.

The Toledo Bend Reservoir lake level dipped to 172.39 feet, below the mark of 172.5 where a release is required.