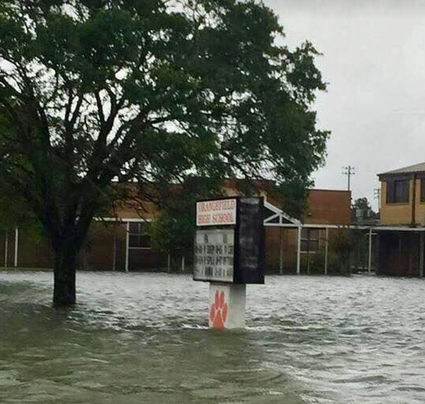 West Orange-Cove ISD said its Middle School flooded as a result of last week’s Tropical Storm Harvey and that all its buildings received at least minor water damage.

Orangefield has also announced some of its buildings were damaged.

WO-C, posting on its district website, reminded parents that it planned to re-evaluate later this week if it can determine a date to start school.

All of Orange County’s five public school districts held emergency meetings last week to make plans, per state law, for the emergency. All announced they were canceling this week of classes and re-evaluating when they will open their schools.

Only Bridge City has begun the school year so far, with its students attending a week and a half of class beginning Aug. 18. All other schools were scheduled to begin classes Monday, Aug. 28, but canceled the first week of classes when Harvey was a Category 5 hurricane and Southeast Texas was a possible landfall.

Harvey left the Gulf of Mexico Friday, Aug. 25 and hit the coast near Corpus Christi as a Category 4 hurricane, flattening buildings and claiming lives in Rockport and other communities north of Corpus Christi.

After three days inland on Houston’s doorstep, during which Harvey’s winds were reduced to a tropical storm, it went back to the gulf and picked up another historic load of water before hitting near Sabine Pass.

Parts of Orange County were hit by 50 inches of rain during Harvey’s five days of local rains. The rainfall also caused reservoir releases into the Sabine and Neches Rivers, which border Orange County on the east and west.

WO-C said in Monday’s statement: “We have already started the remediation phase of recovery at the Middle School and at all of our buildings. We are also working aggressively to prepare our campuses for receiving students.

“As we continue these processes, we will provide updates regarding our status. Please make the WOCCISD website your primary source for information regarding our schools.”

Orangefield superintendent Stephen Patterson in a Sept. 2 social media post, said: “Orangefield ISD is actively working to restore our buildings that were damaged during the recent storm. The district has a substantial flood insurance policy that will expedite the remediation process.”

He then talked about a scary scenario for any district looking to rebuild after a natural disaster.

“It is not necessary for you to enroll your child in another district,” Patterson said.

“We look forward to welcoming your child back to school soon. Together we will rebuild and be stronger than ever.”