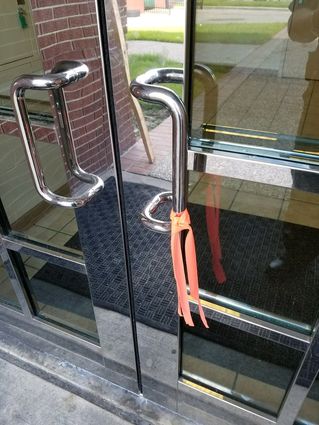 PHOTO: City of Orange law enforcement officers are conducting residential well-being checks and leaving ribbons attached to their property. They merely mean that the property has been checked.

A Monday, Sept. 4, non-fatal shooting south of Vidor was not connected to any type of looting, the Orange County Sheriff’s Office reported.

A news release at midday Tuesday said: “There have not been any shootings or looting-type violence reported at this time.”

Major Robert Enmon of the city of Orange Police said he didn’t believe looting was involved in any of the thefts being worked by his department.

“We’ve had some ‘quote-unquote’ looting,” he said. “We haven’t seen it, but that’s normal to get reports after a situation like this. People think things are missing.”

Orange law enforcers are conducting door-to-door checks on citizens’ well-being, currently completing residential checks in Cove as well as east of the railroad tracks and south of Interstate 10.

They are leaving a ribbon attached to a structure to let them help them make sure all property is checked.

City residents are asked to contact the Police Department at 409-883-1026 if they have any concerns.

The Texas Department of Public Safety has deployed more than 60 troopers to assist in Orange County and provide an extra measure of security.

The troopers will be in marked and unmarked vehicles and will all be in uniform. Their primary purpose is to maintain peace in the community and ensure residents feel safe and secure in their homes as they continue their road to recovery.

The sheriff’s news release on Monday’s shooting said deputies responded to 1110 Butler in reference to a shooting. Upon arrival, deputies found a 32 year old male with a single gunshot wound to the head.

The victim was flown to St. Elizabeth hospital and underwent surgery. His condition is unknown at this time.

The victim was known by the suspect and the shooting occurred after a disturbance between the two.