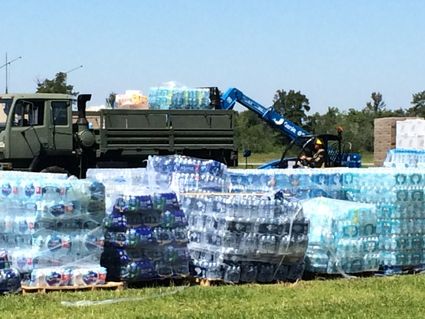 "Man, it's just been crazy," County Commissioner Johnny Trahan said in front of a near-empty airplane hangar at the Orange County Airport.

The hangar doubled as a warehouse full of water, snacks and baby supplies until military transports stopped coming in Thursday morning. As fast as teams of Army National Guard reservists could take the disaster supplies off planes, others trucked them to one of 16 neighborhood distribution sites serving the public.

"All we have an abundance of here is water because the pods have requested us to quit sending water."

Most residents have electricity and safe drinking water now. Trahan says the big need is for cleaning supplies, including bleach and peroxide to kill quick-growing mold.

A major weeklong military airlift effort that include huge Chinook helicopters and a C-130 cargo plane may have ended but private planes continued steadily landing at the airport Thursday and Friday with private donations.

Some of the planes' cargo is earmarked for local religious organizations or businesses to distribute. Some of the deliveries are open-ended, left to be sent where most needed.

The goods were getting delivered, not hoarded.