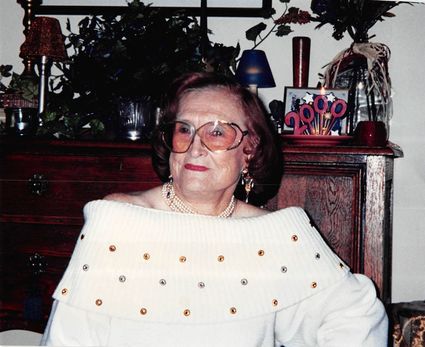 She was born July 12, 1918 to the late Kitty Florence (Guise) and William Jackson Thomason in Warren, Arkansas.

Carmon was a faithful member of the First Christian Church in Orange, Texas.

She was preceded in death by Henry Alvin Hill, the father of her children and her daughter Annie Ruth Hill and her son Henry Bruce Hill, her late husband Jess Davis and her siblings Quinie Gardner, Uldean Ragar, Helen Whitmire, Vada Runnels, Clotene Shackleford and Drexel Thomason.

She is survived by her son Brooks Hill and wife Diana, grandsons Jim Hill and children Lauren and Brooke, Henry Colin Hill (Naomi) and son Dylan, Barton Franklin and children Ryan and Garrett.

Carmen Davis will be remembered for her many attributes.

She played golf not only as a hobby and business network, but as a fierce competitor.

She leaves behind a legacy at Sunset Grove Country Club.

Her cooking talents were admired by many in the community and her home was the place to be on special holidays.

She is known for her Arkansas recipes and the best divinity worldwide.

She played gin extremely well and the grandkids were taught the card game at an early age.

No one got to quit if the game was not in their favor.

She used it as a lesson about strategy and perseverance.

Carmon was the only one of 6 siblings to finish high school.

She was brilliant and resourceful.

Many in Orange, Texas remember Carmon as a female pioneer in the Real Estate world.

She owned and operated Jess Davis Realty after the passing of her late husband.

She was a female contractor and let’s just say she gave real meaning to the feminist movement.

There was nothing she could not accomplish especially if anyone challenged her limits because she was just a “woman”.

She had many great jokes and was always the best dressed at any event she attended.

Her wardrobe ,often mistaken for couture designer’s, she made herself; another one of her many talents.

She was not fond of laziness.

She believed if you had something to give, you should give it.

She worked with Friends Helping Friends and the Salvation Army.

Carmon touched each one of her 6 grandchildren with life lessons many are not fortunate to receive.

She will be greatly missed but her legacy will live on in each of us for years.

In lieu of flowers, please give to your favorite Hurricane Harvey relief.