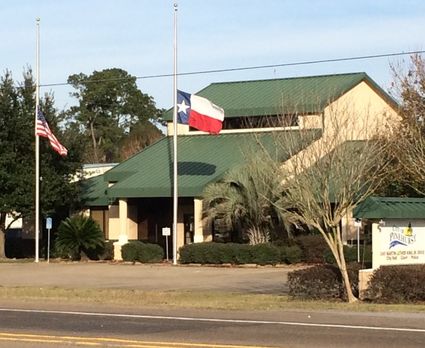 The 20-member volunteer fire department, with plenty of help from the city’s other 26 employees and an outfit called the Cajun Navy, rescued an estimated 1,000 people from high water during the night of Aug. 29-30 and for a couple days after.

They used everything from kayaks to flat bottom boats to airboats to the city’s dump truck to swoop people – many of them elderly -- out of their flooded homes and deliver them to higher ground.

“The Good Lord got tired of all this bickering on TV and this water brought us all together,” Mike Wiley of Pinehurst Fire & Rescue said.

Fred Hanaeur, police chief and emergency management coordinator for the city of 2,200, was plucked from his flooded Orangefield home by a city employee, who wound up rescuing a dozen more of Hanaeur’s neighbors.

“Robbie was always there,” he said. “It makes me so proud to work here.”

When dispatcher Dawanna Stringer needed a break after 19 straight hours at the start of an 11-day encampment at her post, she turned to city secretary Debbie Cormier.

“She knew just what to say,” Stringer said.

A veteran of three hurricanes, Stringer said that members of the Pinehurst VFD and members of the Louisiana-based airboat rescue group called the Cajun Navy answered calls at 300 homes that first night.

“We have a bunch of 90-something people in Pinehurst,” she said. “Probably 90 percent of the population in Pinehurst is elderly people. They need our help.

“We got everybody out.”

Branham said all other fire departments in the area shut down at midnight the night the water rose.

“We kept going until 2:15 when the high winds went through,” he said. “All of our groups, we worked so good together in this tragedy. It’s an honor to be part of this community.”

And it ended its night in a celebration.

“I always said when things are bad out there, these people are the best,” Hood said.

Mayor Pete Runnels, a Pinehurst resident for 40 years, choked up when it was his time to talk.

“Honest to God, I am so proud to be a part of Pinehurst,” he said. “It’s so special.

“I got three feet of water in my house and my children want me to sell it and move. I don’t want to.”