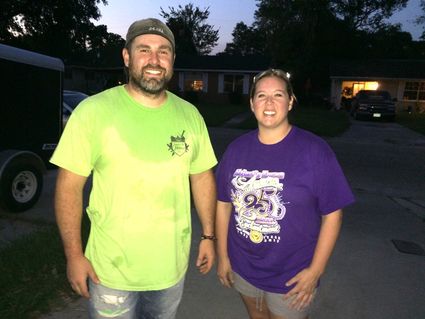 Talk about a Godsend.

Two of Bridge City’s top trending examples of people helping people met up late last week when they showed up for some storm cleanup at a home in Orange.

Until then, Scot Shaffer and his wife, Angel, had never met Lenzi Belcher or her family.

“I would definitely recommend him. He’s a Godsend. They were a Godsend,” Nancy Working said of the Shaffers, after they joined her daughter-in-law Lenzi and son Lamar Belcher to strip the waterlogged sheetrock and insulation out of her flood-ravaged home.

Working hadn’t been home much since the storm.

She had been helping Lenzi, the owner of Kidz World Learning Center, 1875 Miller Dr., serve meals and run a distribution center out of her business.

“A caterer friend of ours, Ricky Hollier, came to me and said, I can cook; I don’t have anywhere to serve,” Lenzi said, recalling the period immediately after the weeklong rains from Hurricane Harvey stopped and Orange County found itself under several feet of water.

“I didn’t have water in my business, so it went from there.

“We opened the doors and they came. We were averaging about 400 people a day for lunch and dinner. Some of the people just wanted air conditioning and a table, some place that was normal.”

Kidz World quickly went viral and became vital for folks having a tough time in the Orangefield area.

“We started serving food and people just started thanking me and tagging me on Facebook and thanking and sharing.”

That led to a woman from California showing up with two 18-wheelers loaded with clothes and baby supplies. Belcher said the woman sent another 18-wheeler full of needed goods and one also arrived from the J.J. Watt Foundation.

“We have a 10,000-square-foot gymnasium at the daycare, so we just set it up as a distribution center,” Belcher said. “We let people come and get what they needed.

The food and goods went on for two-plus weeks.

“We didn’t stop serving food,” Working said. “I didn’t come to my house. It was more important to get them food and clothes.

“And that’s what we did. We cooked food and served it, and then we worried about ourselves.”

The Shaffers had been busting it for storm rescue since before the storm hit Orange County.

“We actually started our first thing when we knew it was going to come in and just devastate down in the Corpus Christi area. We actually started to gather a few different things, canned goods, the normal stuff, necessities,” he said.

But he was working with a national auto sports group he belongs to, Jeepers4Jesus, to set up relief for Corpus.

“And of course, when it turned to our direction, we kind of had to readjust and say, ‘Hey, our own backyard’s going to be affected.’

“So, quite a few different jeep groups throughout the state of Texas and the country kind of came together. They donated a lot of the supplies, also.”

The Shaffers spent the first week after the storm working with churches throughout the Bridge City and Orangefield area and social media contacts to set up a network and stock a distribution center at Commonground, which is only separated from Kidz World by a school, a gas station and West Roundbunch Road.

“We’ve had so much support from around this country,” Shaffer said.

“She mentioned Godsend. That’s what these people across the country have been.”

While others tended to the distribution at Commonground, Shaffer used Facebook to line up fellow volunteers and jobs mucking out homes as soon as floodwaters receded.

“The first few weeks we did anything from four to seven houses a day, that was just rocking and rolling,” he said.

“One in the morning. Then I went to the office, did what I had to do at the office. After work, we’d go out and do one more, so we’re only doing two a day right now.”

Shaffer worked hand-in-hand with his wife.

“She’s been by my side the whole time,” Shaffer said. “Angel’s a harder worker than I am.”

And late last week, they met the Belchers and powered through three more hours cleaning up at Working’s home.

“The people who are bringing these supplies in from across the country, just pouring their love into Southeast Texas, those are the people that are really doing a whole lot, in my opinion.”

“I really think it was crazy how it all worked out,” said the member of First Presbyterian, Orange. “Somebody bigger than me had it in their hands.

“We ran out of something and an 18-wheeler showed up.

“When we opened the doors, we just became the hands and feet of the Lord and did what was provided and what we were told to do.

"That was the only thing I knew.”