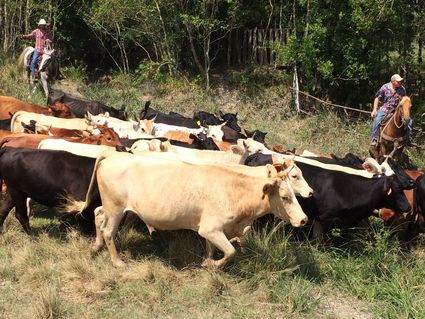 Brad Schreiber, left, and Kyle Ellis herd cattle Sunday as they move the animals from their temporary pasture in Orange where they escaped flooding from Hurricane Harvey.

The call came to Todd Ellis a couple of days before Hurricane Harvey made landfall near Corpus Christi Aug. 25.

“His pasture was right under the Rainbow Bridge,” recalled Dan Harris, who made the call. “I told him he had to get his cows out or they’d drown.”

Ellis, from Gist, above Mauriceville in Jasper County, retold the story Sunday as he and his brothers and cousins and nephews, retrieved the 50 or so head of cattle from their temporary home in Harris’ pasture north of Orange.

Ellis hadn’t seen them since the storm, and the cows were more than a little worse for wear.

“This time of year, they should be in the best shape, but they look like they should in December,” Harris said.

But they were alive, nearly three weeks after Harvey caused the rivers to rise and left dozens of humans and thousands of livestock dead in its path.

During the storm’s immediate aftermath, airboats were used to rescue cattle and horses from high water.

Plenty of animals didn’t make it.

A cattleman showed up at the Cowboy Church’s rescue site with 35 cows in his trailer. Five were in bad shape. Thirty were dead. The big cowboy was bawling.

Down the road, at the T-2 Arena, Colorado veterinarian Scott Martell worked with a crew of volunteers to treat horses that came in with the flesh falling off their legs from standing in water for a week.

But it wasn’t just scores of volunteers like Michigan pet rescue operator Laura Zain and Miami’s Alison Thompson who came from across the country to help at Cowboy Church.

Donors from Florida to Maine brought hay, feed and supplies to an operation raised jointly by Cowboy Church and Texas AgriLife and overseen for nearly three weeks by Deven Peveto Michael.

Pastor Anthony Linden of Mansfield, Massachusetts, drove with a friend and his 12-year-old son 35 hours straight to drop off 3.5 tons of animal food and supplies donated by the Homesteaders of Massachusetts, a Facebook group.

Hay was hauled out by local farmers as fast as it arrived from Louisiana and Missouri and who-knows-where via flatbed trailers.

One woman filling up her trailer with hay said she had 16 horses scattered in pastures around Orange County when the rains began. Half of them died.

Ellis said he and partners Brad Schreiber and Troy Ellis, his brother, had 140 cows and about 20 calves on five different area pastures when Harvey roared up from the Gulf of Mexico.

Floodwaters claimed about $300,000 worth of trucks and tractors in and around Ellis’ barn in Gist.

“We had no insurance for most of it, because we’re not supposed to flood,” he said.

Thanks to the help of people like Harris, Ellis lost only four cows.

Texas is the largest cattle producer in the nation, claiming 11.7 million head and $10.7 billion in sales in the latest annual figures available.

Orange County, according to the most recent USDA census, has more than 8,000 cattle on 440 farms. Harris, who donated the land for the Cowboy Church, has one of the largest farms, with room to take in boarders.

“I’ve got cattle that aren’t mine in a lot of pastures,” he said last weekend.

Ellis eyed his cows closely as the five other men sorted them and loaded them into trailers to carry them to their next pastures.

“To keep them this winter, we’ll have to feed them twice what we normally do,” he said. “That’s a lot of supplements and hay.

“With all that said, I’m real happy with the shape these cows are in, because otherwise I wouldn’t have no cows.”